For 15 years, the club’s oldest and happiest tradition – the Weasel Pyle, has been each season’s penultimate event. Multiple games commence over the span of a full day to offer a last chance to qualify for the club’s championship exhibition or winning the league to become the Weasel of the Year. Pyle XV offered a chance for both.

At the Pyle’s origins in bucolic Wayne, directionally or transportationally challenged players would miss the kickoff time. Legend has it that carpools of Weasels left the City and made it halfway to Iowa or Wisconsin – it was as certain as Russia not succeeding in our early club games. So in an effort to keep spirits high for prompt individuals, later games called 2nd chance boards would begin with those late arrivals as well as those massacred in the beginning of the early games. As has come to happen, they should be called Last Chance boards, because starting with the first two in 2012 – 2013 and then again from 2016 – 2018, Weasel Royale placement and league champions have been crowned. As only 2020 could do, Pyle XV offered that chance as well.

Rookie Wes Ketchum’s board top in his morning round still left him a little short of catching league leader Brandon Fogel, who sat out the morning rounds to serve as Game Master for this year’s virtual games. Fogel was in search of his 4th Weasel of the Year (in the last 5 seasons), which would be a club record.  Additionally, Prime Weasel Bryan Pravel entered the day in 7th place, but fell out of the Top 7 after a weak morning round performance and a strong surge from another rookie, Michael Stover.  This year’s Last Chance Board provided as much drama as this script writer (and Last Chance GM) could handle.

Chosen randomly by Backstabbr, the top 2 were seated as corner powers with Pravel stuck in the middle as Italy. 3 of the remaining 4 players also sat just 25 points behind 7th place with the 4th, Christian Kline, already safely in the Royale.

Helped by a French NMR in Spring 1901, Ketchum gave back the momentum in Fall 1901 by incorrectly ordering his convoy to BEL. Into 1902, Germany maintained an attack into the slow-starting France and also grabbed BEL while also butting heads with Russia in Sweden. England pursued position to gain SWE with Germany’s help in 1902. E/G both built armies to continue their push east.

Taking the bull by the horns in the East, Pravel marched through TRI to BUD and landed his fleet in AEG to end 1901. Picked up SER and GRE in 1902 and grew to 10 centers at the end of 1903 thanks even to support from Turkey into one of the Turkish dots. While helping Italy to a huge win surely was not Fogel’s plan coming into the game, keeping Ketchum away from big points would secure the league’s top spot.

To win the league outright, Ketchum had to play catch-up to the Italian’s explosive start. He started to shift gears in 1903 by picking up STP with an army on his own and swiping HOL from Germany as Brown swiped WAR. But even then, he trailed by 3 centers early on and Pravel still had open seas to his right and left.

While it is near impossible to keep that torrid pace, Pravel left the door open a little in 1904 with an army mis-order and a tactical choice with his western fleets that didn’t go his way. Ketchum continued to steadily grow another center in 1904 and 3 more in 1905 by eliminating the German. Pravel’s southern fleets got lost at sea and gave up TUN to the growing French making it an 11-11-8 game with two years likely to play.

With Pravel losing a center and pulling his most eastern fleet while Turkey grew for the first time since 1901, he placed his trust in Fogel’s desire to win the title by keeping Ketchum in 2nd place. England also came under fire from France’s new hopes of a strong score, but a strong Italian push in the western waters forced a French turnaround. Even though France re-allied with England, the Italian forward progress was enough to secure Pravel’s place in the Weasel Royale and Fogel’s place as the Weasel of the Year record holder. Both Pravel and Ketchum fed off of their neighbor’s dots in 1907, but the Italian position was wide enough to capture 1 more than the Brit. 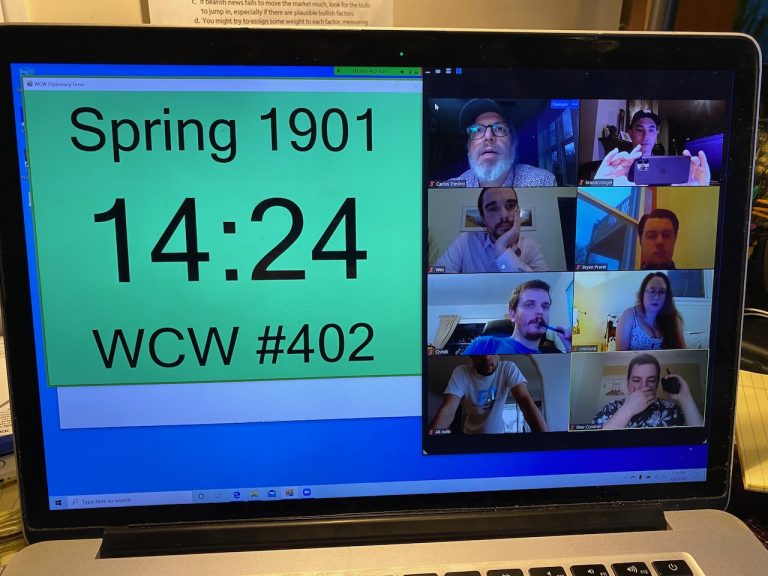 Intro game at the Red Lion

This Wednesday night, we’ll break in another new venue, and hopefully lots of new players, as we host an introduction to Diplomacy game at the

Jake “The Goat Lover” Langenfeld made it two for two on the young Season 13, topping his second board in as many chances last night