After zero points in the first game I was glad to draw Germany. Early on, I decided it would be reasonable to offer Russia Tyler Sweden to gain a friend whilst I decided how to play the west. Having made this decision, why not go for 3 builds? After all, I wanted a big result, and was willing to risk looking big in 1901 as it might give me leverage with either France or England in 1902, depending on what they desired to do. At some point in Fall 1901 negotiations, however, with my fleet in Holland and France’s (Zachary) in the English Channel, we agreed to put my fleet in the North Sea and his army into Belgium. That was the beginning of a good relationship for us. This game ended reasonably early, as Italy Jake locked up the Med, with Zachary board topping in a 5-way draw on 10, myself on 8 after a blunder failing to hold Warsaw against Tyler’s well-coordinated attack.

Regrets: Not more decisively moving against Russia-at one point I might have taken Warsaw and StP in the same or consecutive years, but played too slow. Another was the good but delicate relationship with Zachary, who kept two units adjacent London, which he nicely informed me he would take in the game’s final year. Obviously I’d have rather board-topped but it was my first non-0 result, so it was okay considering several things definitely went my way.

Gotta love any game that draws by 1906. This will be a quick AAR because the game was quick. I knew I was likely to be targeted, so my goal was to hopefully pick up 20-30 points and support someone else to a board top.

The east had a strange dynamic… Russia and Turkey were both newer players, Austria was on two boards, and I was leading the tournament, but in the hardest country to kill quickly. My initial thought was making it easy on Austria and pitch a long-term key where Russia would hopefully join in. That was largely successful. Russia could have exploded as he had no real enemies in the early game, but ended up staying at 7 from 02-04.

The west resolved extremely quickly – England jumped off his dots in 1903, if I remember correctly. That gave a strong FG rapid tempo across the line… tempo I did not see quickly enough.

France got the jump on me, swiping Tunis in 04 just as I was about to build. That proved the difference in this game and likely the tournament. If I build there, I have enough ammunition to take hold France off and grow in the east. Kudos to Zach on a well-timed move.

Instead, I had to stab Austria to stay level and double back to cover my home centers.

I realized that if the FG continued making progress, a solo was likely… which is a worst-case scenario when you’re leading the tournament. I mostly negotiated over the board, and FAR formed a grand alliance to hold them back. Once FG realized they were stopped, a draw went through, and I picked up 15 points.

Tony (Austria): Always a blast my man, thanks for holding on in the grand alliance.

Mike (England): We didn’t have a lot of opportunity to speak in this one, but I hope you had fun.

Zach (France): Very well timed on both of your stabs in this game… well deserved W and huge in winning the tournament.

Erik (Germany): On all three of your boards, you were in contention to win. Well played to have the strong alliance that you did – you read Zach much better than I did in this game. I never sensed much willingness to move on France together. I actually think you made the correct call there – if board dynamics play out differently, you likely take home a big score. Though, had you tipped me off about the move to Tunis, you would have had an easier path forward than France did – unsure if you were aware though.

Jake (Italy): How many times do we have to teach you this lesson, old man?

Tyler (Russia): Dude, really great playing with you. You’re obviously a very bright guy with big ideas. You did well to read the situation early in the east, and had you picked up a little more tempo in the west, you’re likely a strong contender to top this board. Showed a lot of good fundamentals in this one.

Mathias (Turkey): Not super fun when you’re the target, but really little you can do when 3 people want you dead. Best of luck on future boards. 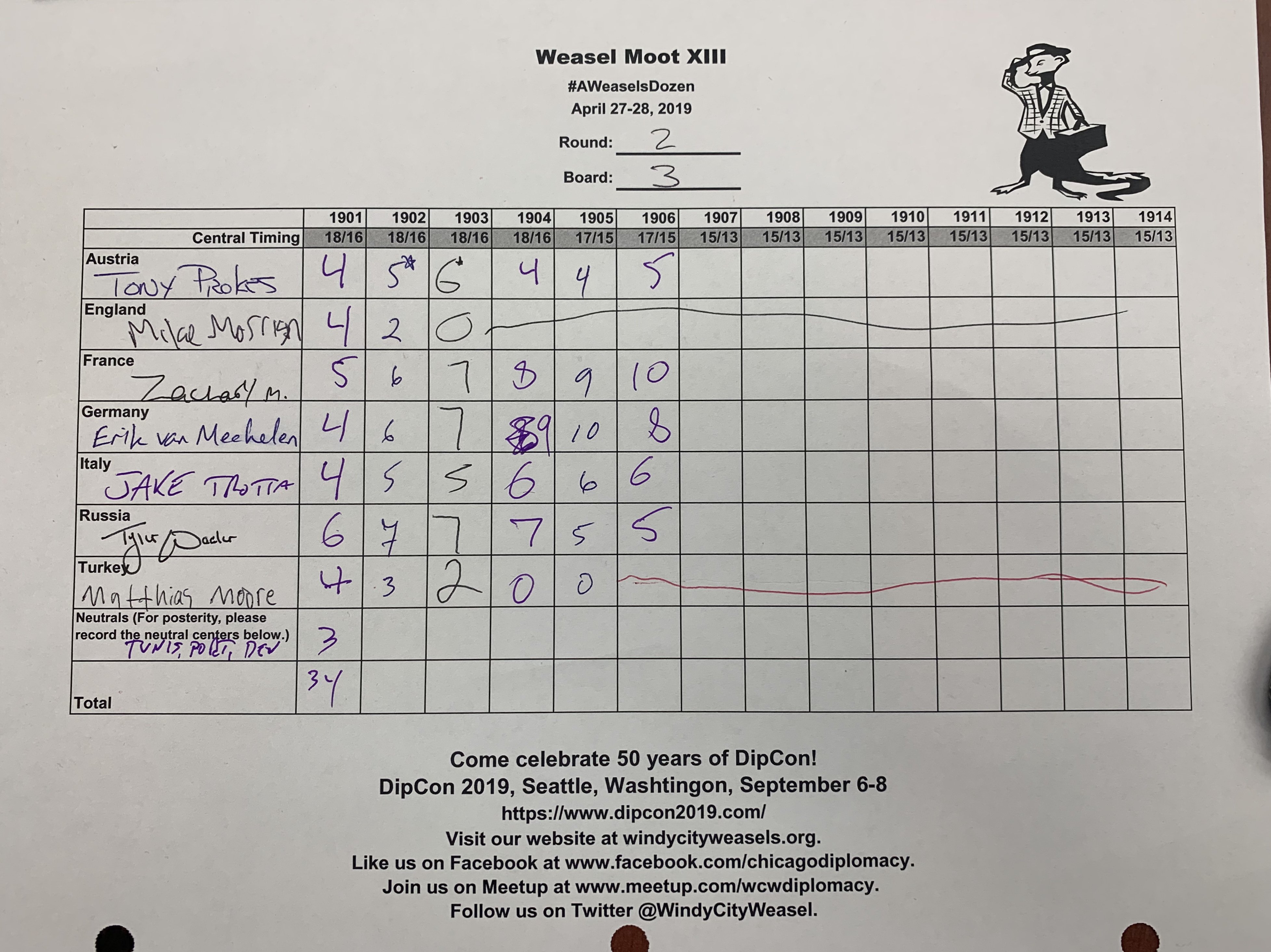 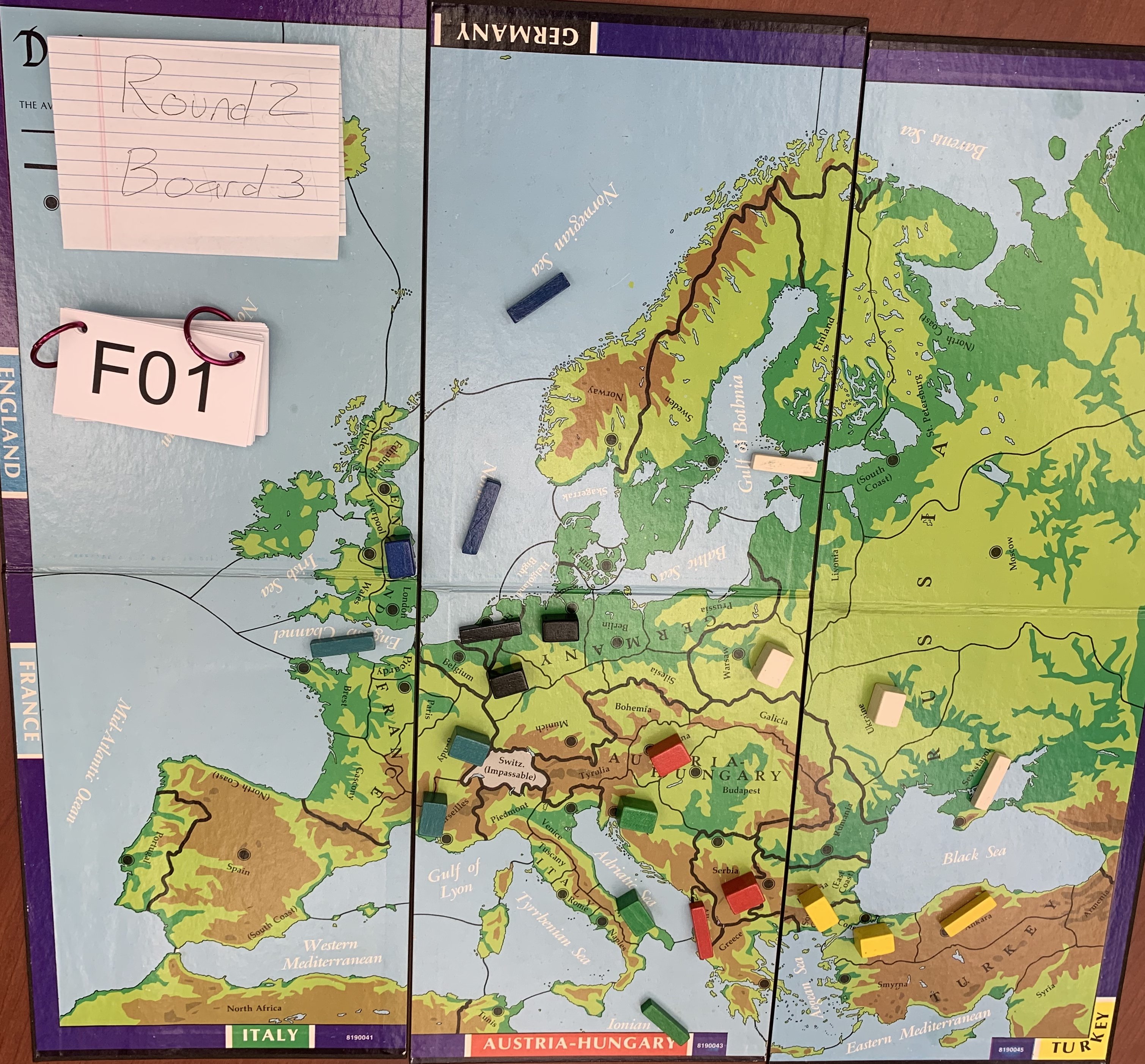 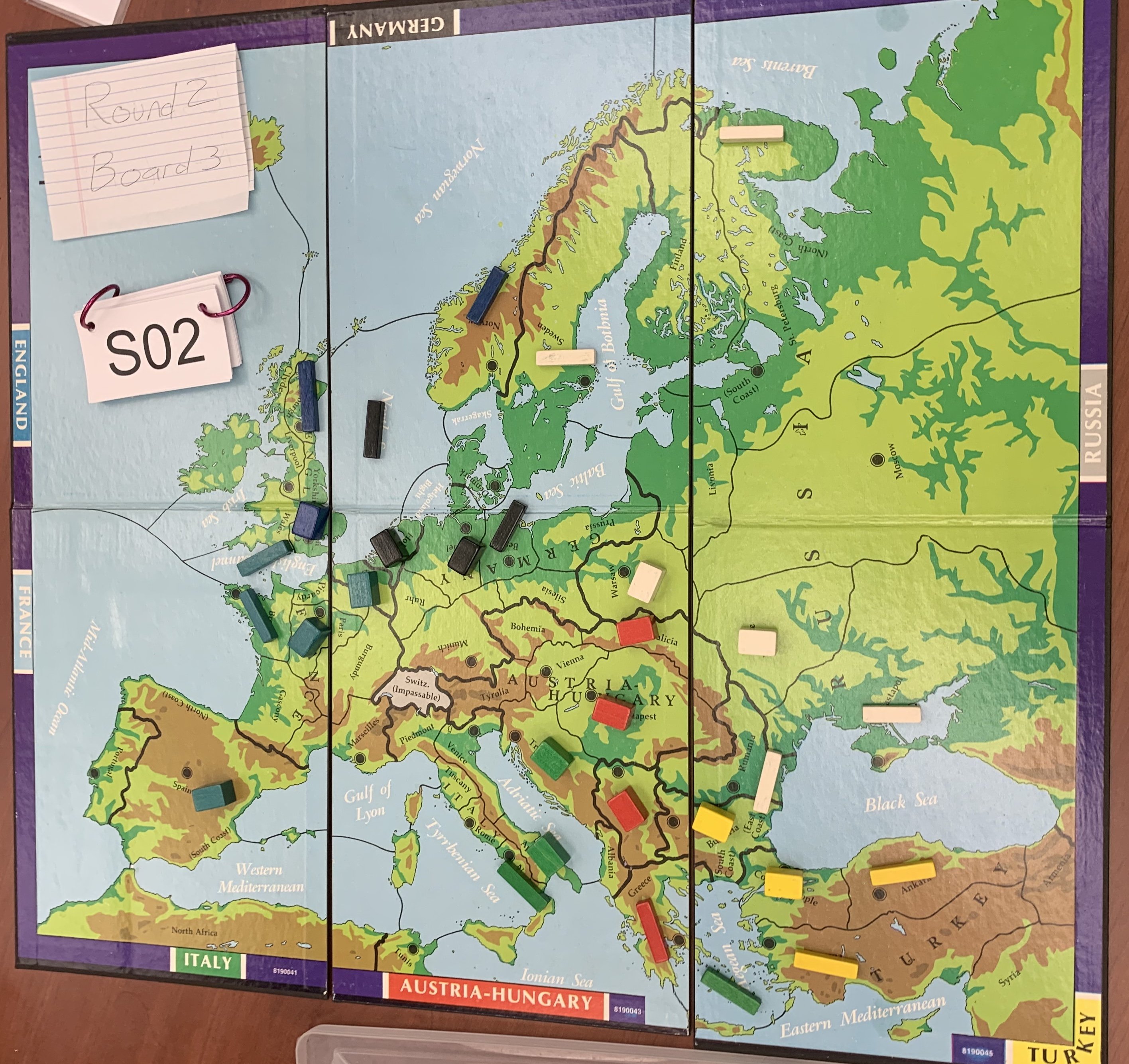 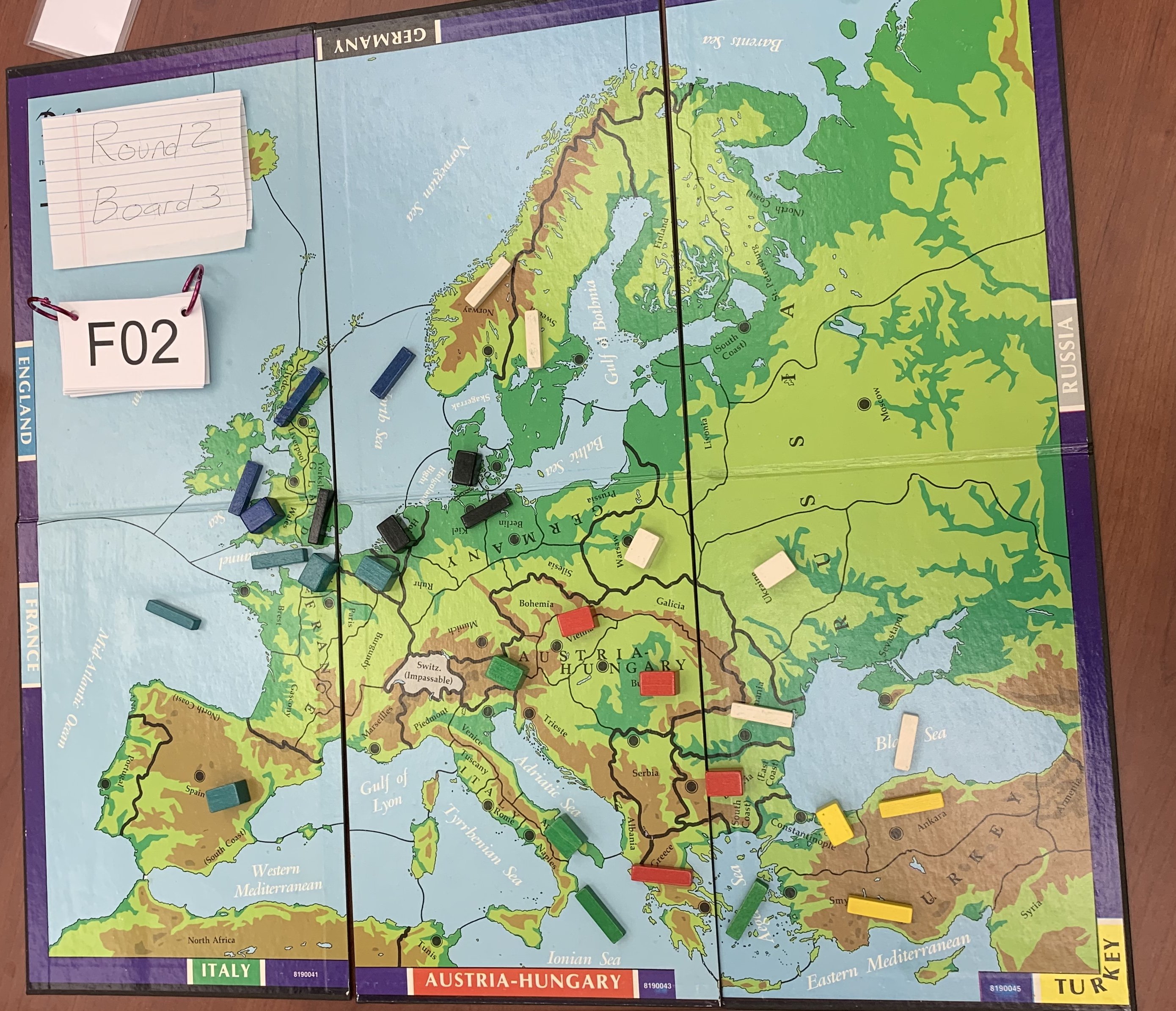 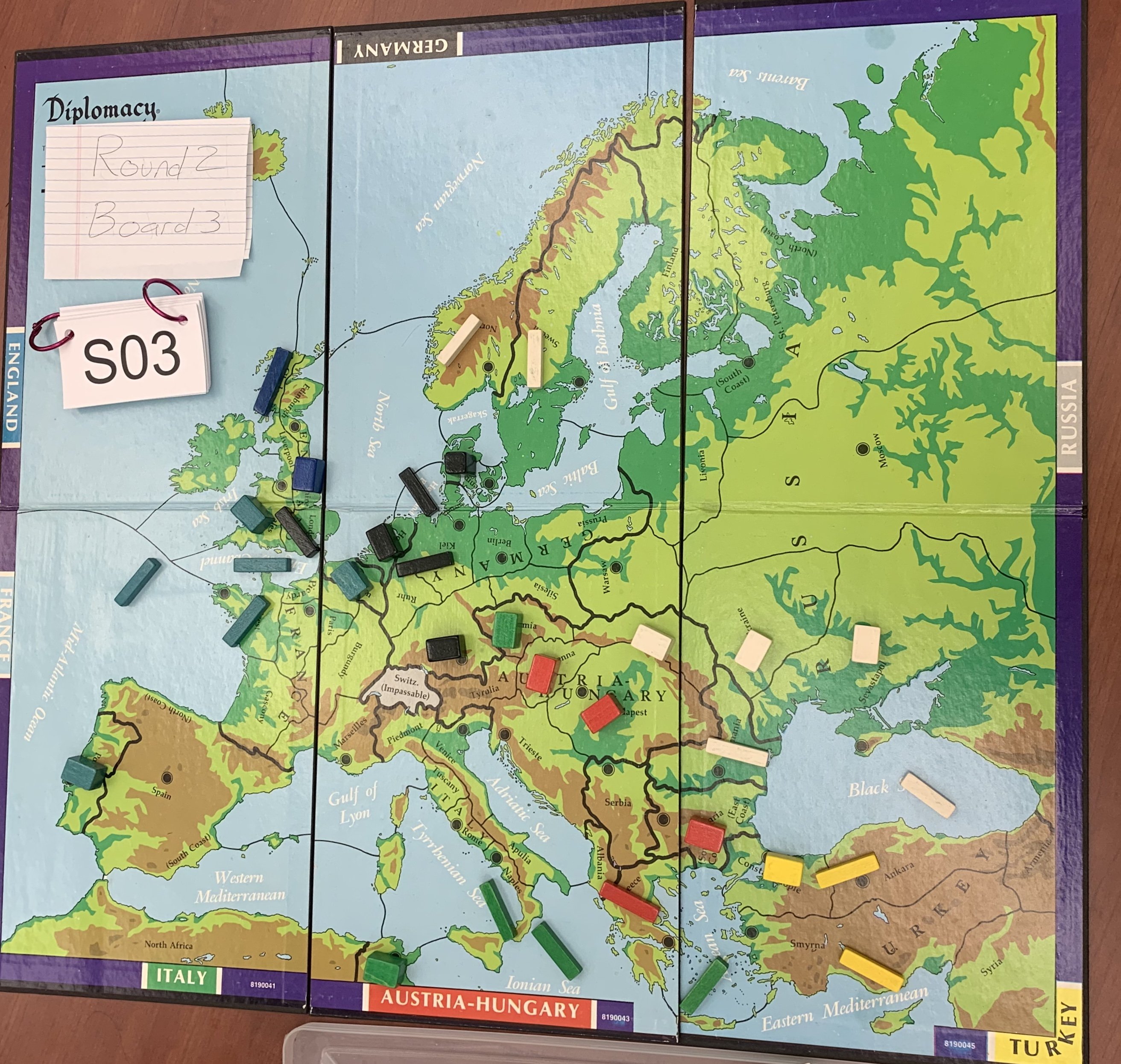 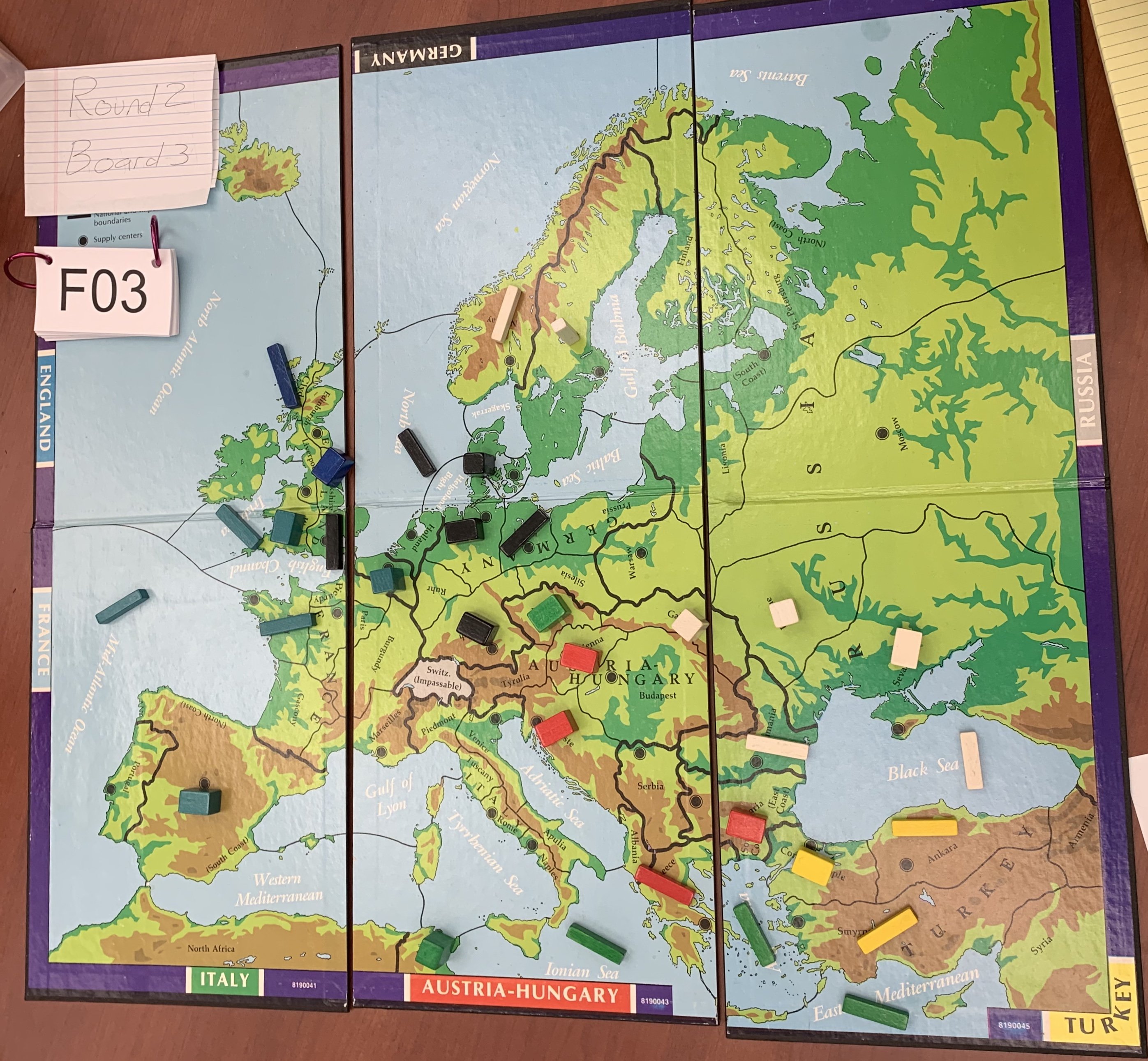 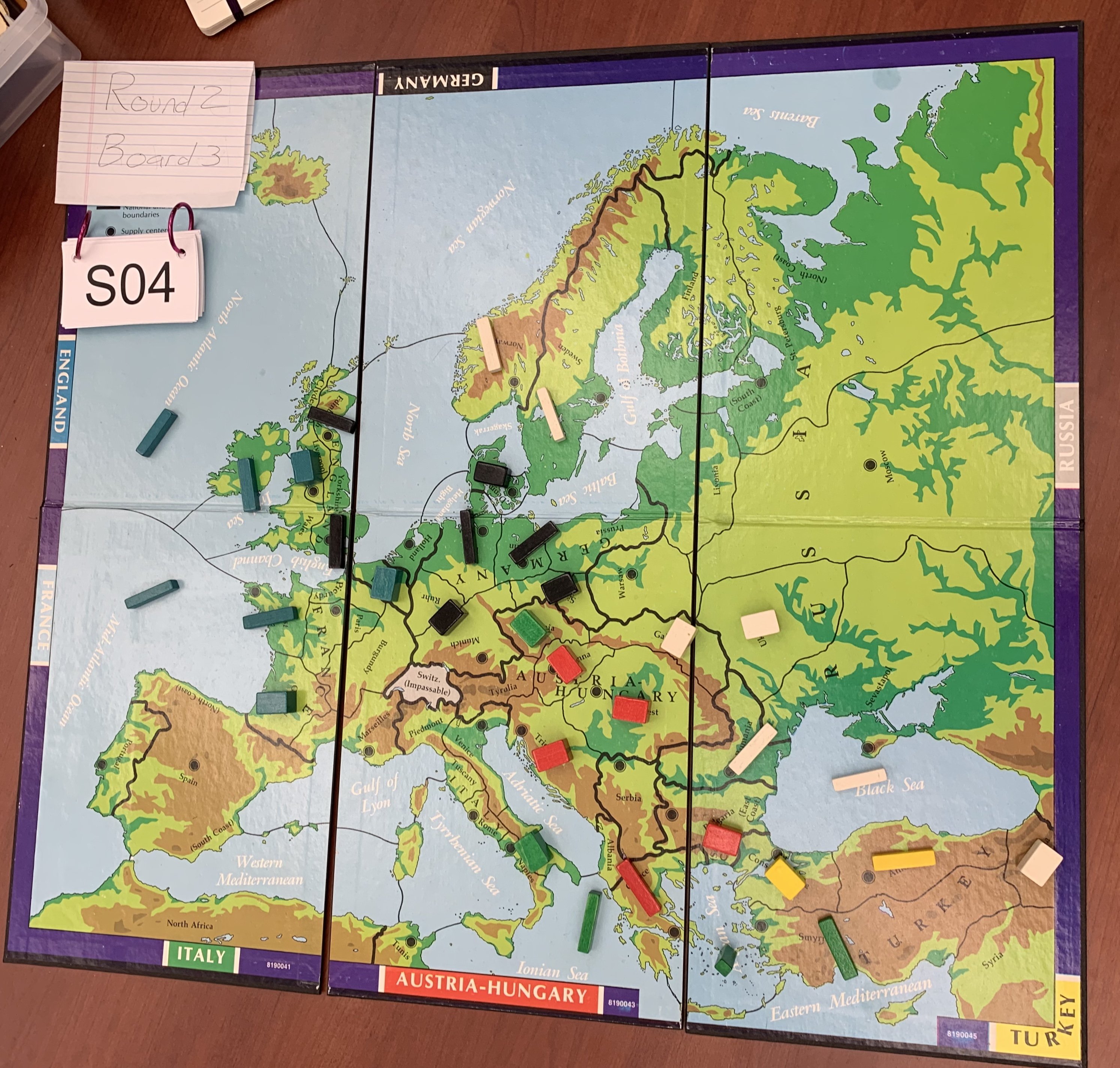 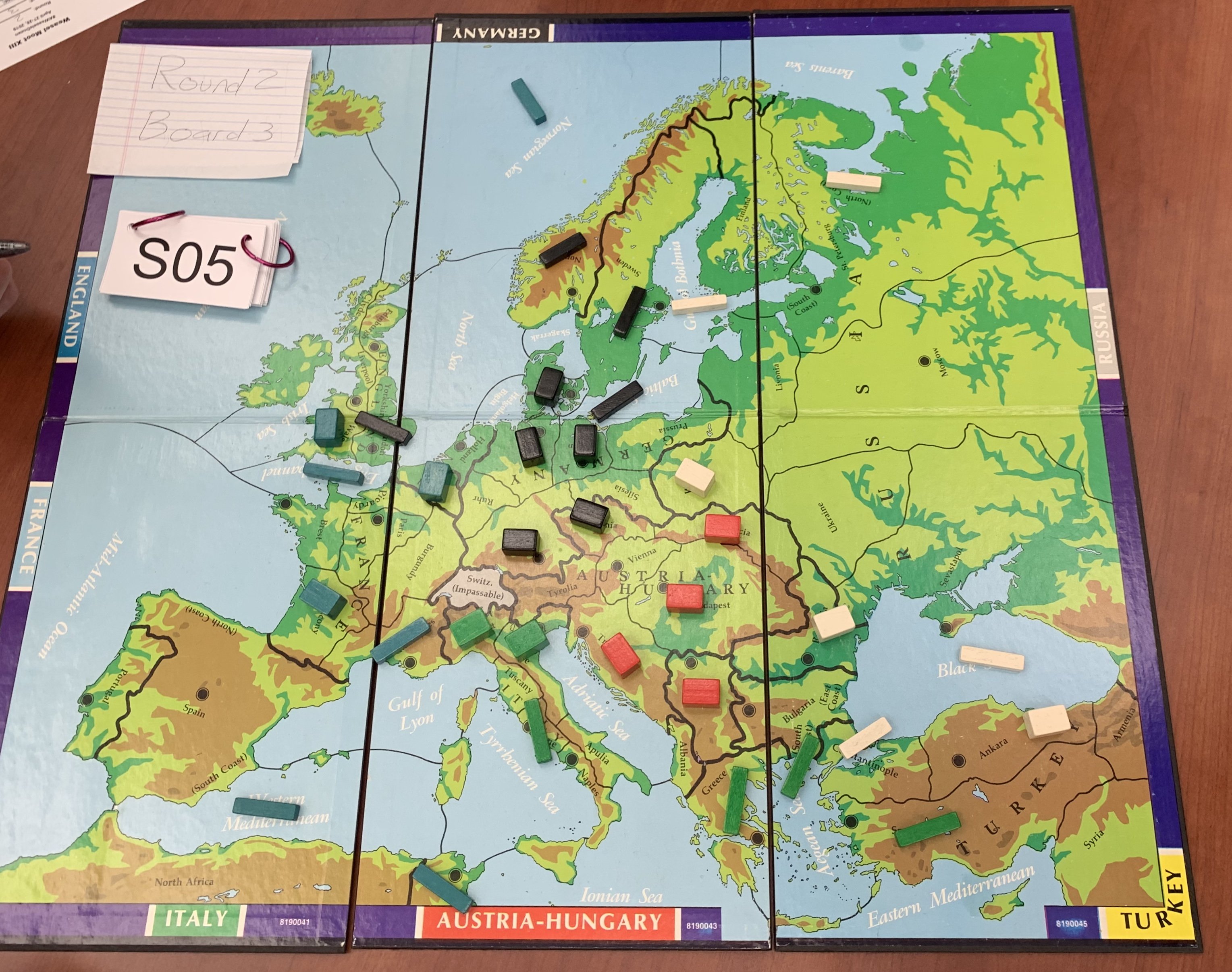 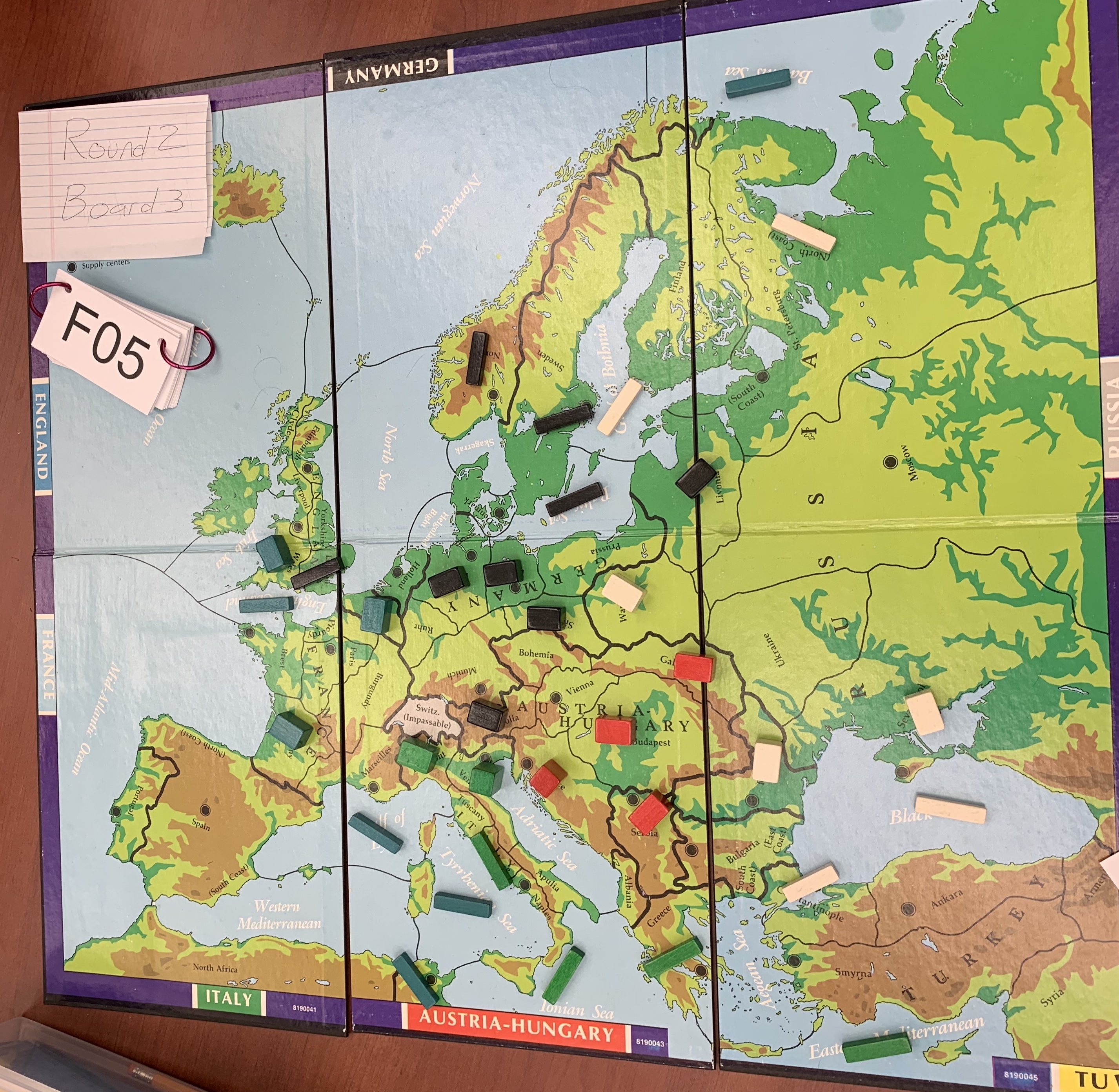 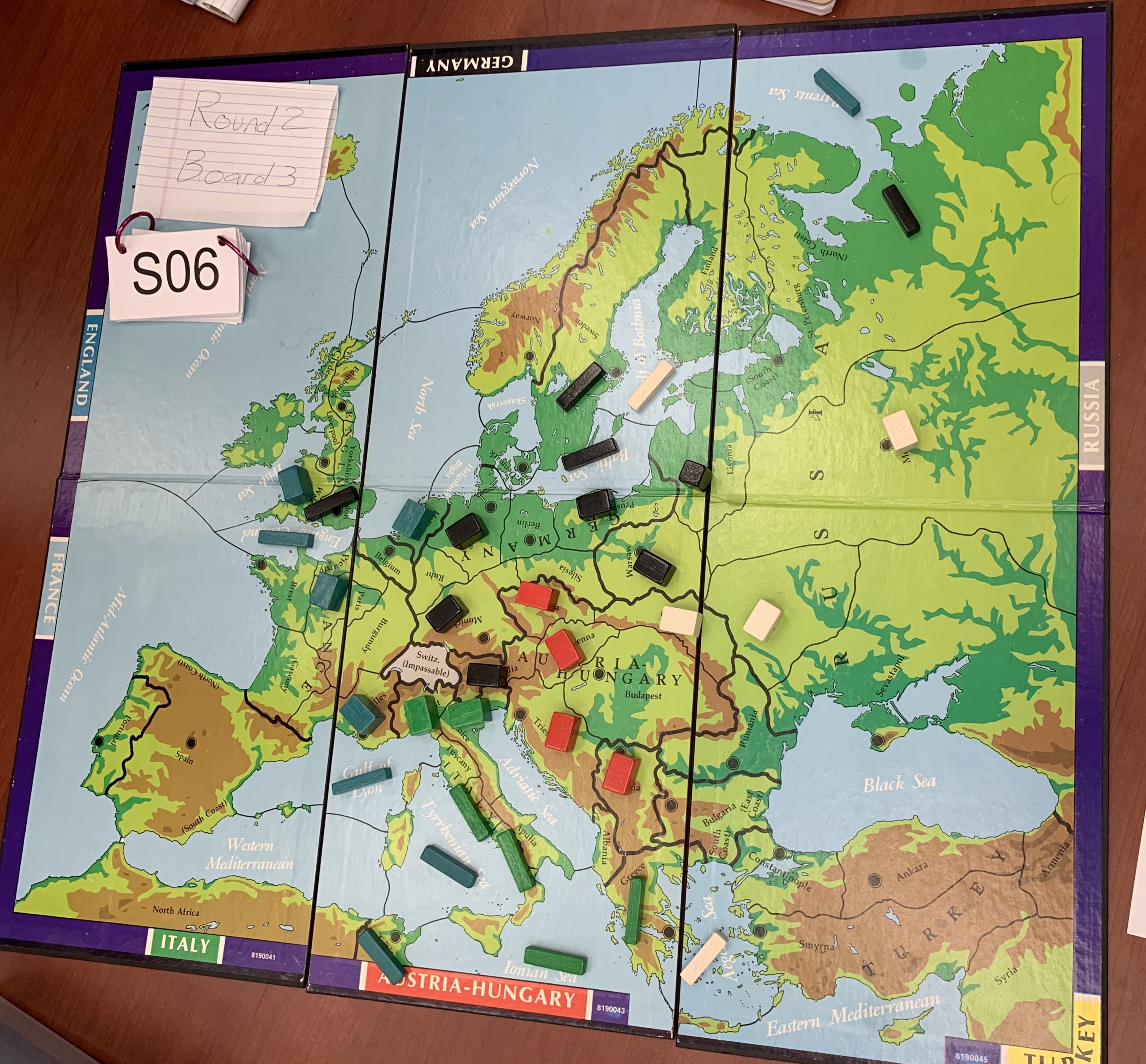 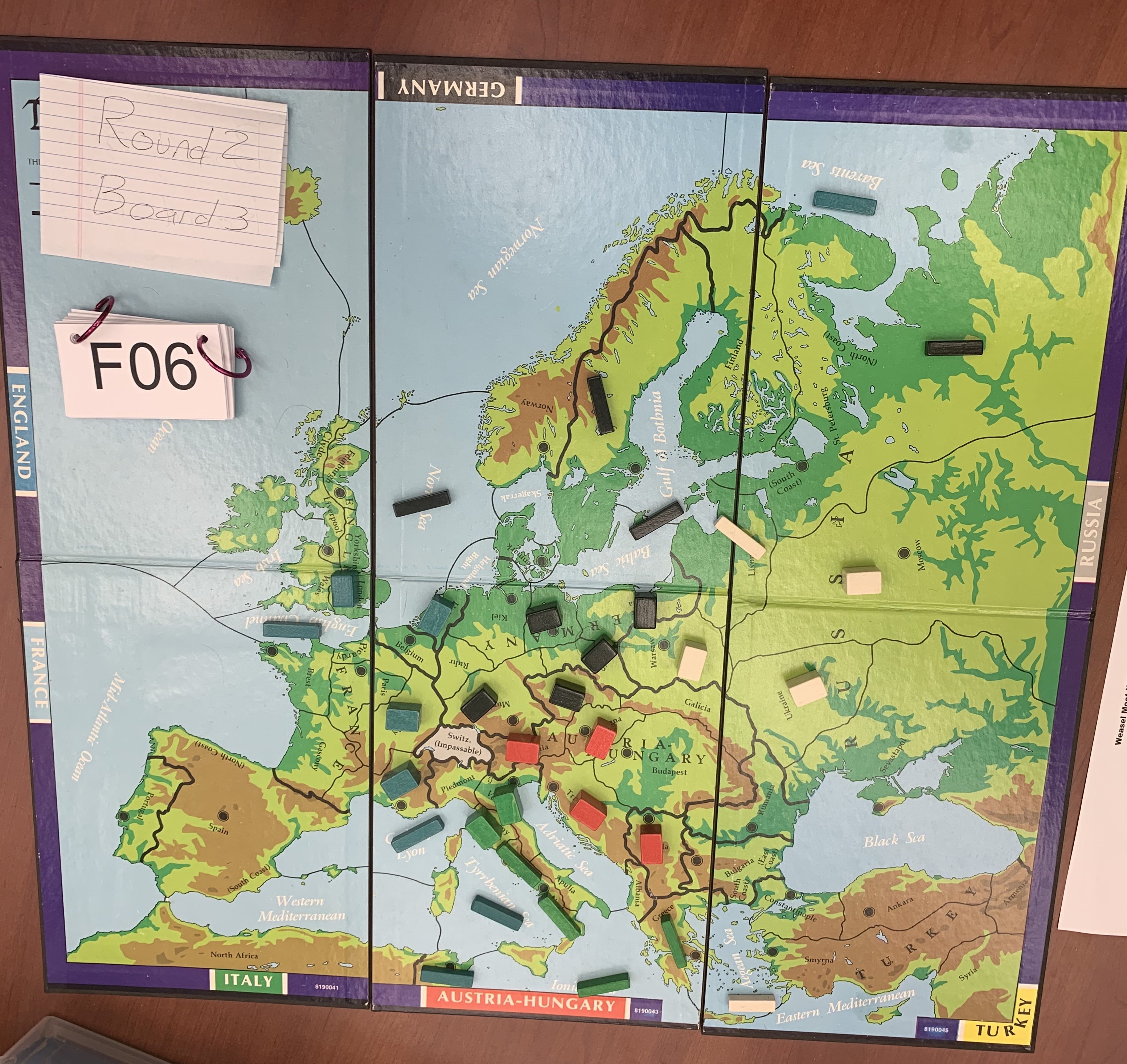 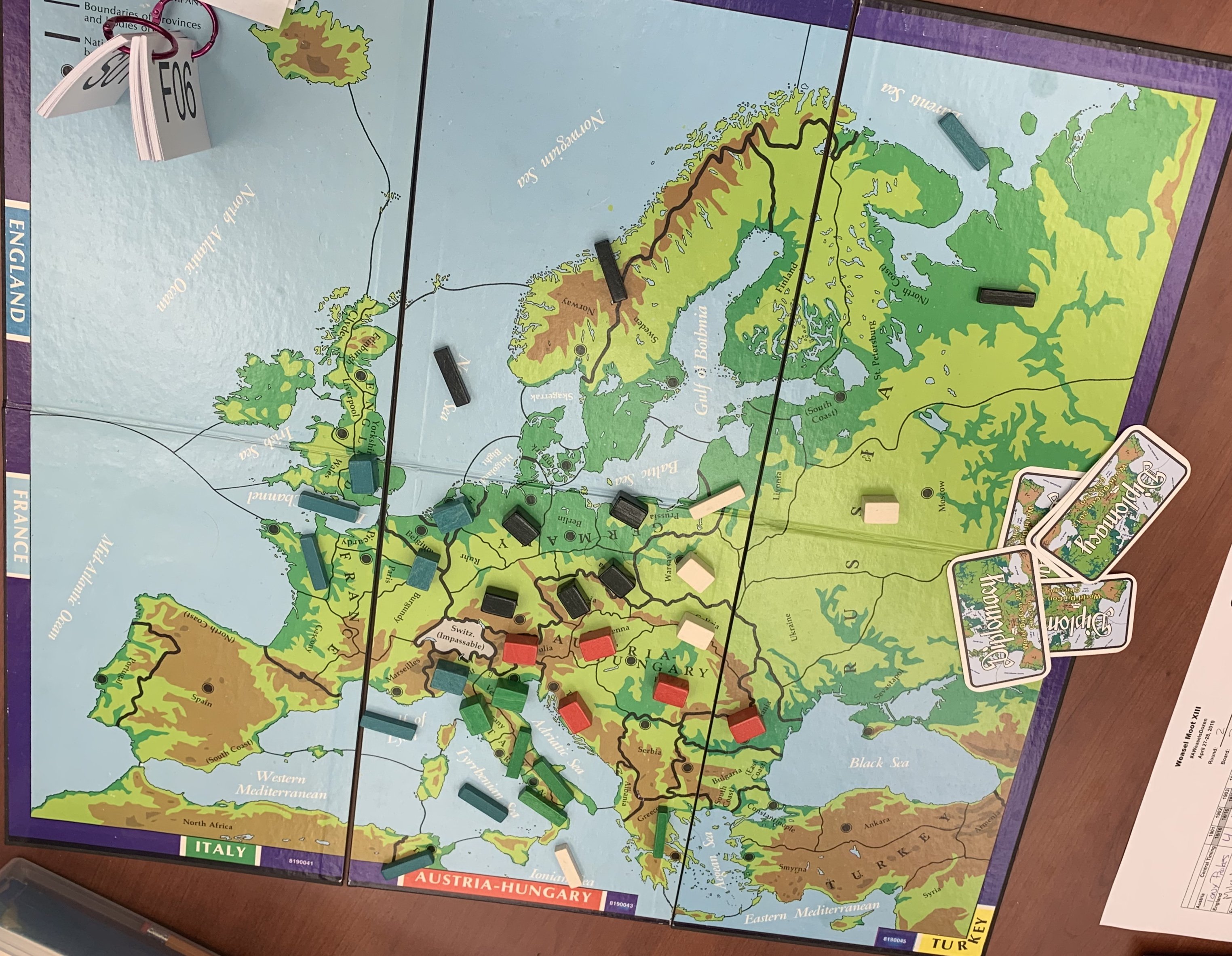 Our 14th season is winding down, which means we’ve been doing this a long time. And like any old show, we occasionally recycle story lines.

Game No. 171 was billed as a Leap Year celebration, and Mike Morrison embraced the theme. He showed up at my home in Little Italy