My first solo! I’ve almost soloed before and have come a long way since getting to 13 dots for the first time and announcing to the board “I’m going for it!” Pro-tip: don’t announce your intentions to solo.

Both France and England seemed open to working with me. They pitched a triple, but Braden and I decided on getting him into the North Sea in 01 instead. I went the FG route because a triple meant a 1v1 tactical battle between myself and Matt Sundstrom. That would be a very fun adventure to explore on a non-tournament board. Italy seemed keen to go east, so my early game was driven by 2 objectives.

-In the west, gain a strong ally (Germany) and ideally still have that alliance with me in the North Sea eventually

-In the east, outpace Italy to either prop him up vs Turkey or, if possible, get the drop on him.

In the east, Italy and Austria got their key stuffed in 01, then in 02 Italy and Turkey patched up to kill Austria. This created a lovely dynamic where Russia was deciding whether he wanted to work with Turkey or Italy. That dynamic not only means Russian pressure in the north, it likely means Italy will be too occupied to head toward Iberia early.

This provided the time to allow the west to resolve in my favor. Via a convoy to Wales, I began picking off English dots. England chose to commit more of his units to fighting Germany, and Russian indifference then hostility meant that I had an easier time making progress.

Due to early DMZ’s and displays of trust with Germany, we had established a level of trust that allowed me to be in a great position to stab. I knew I could pick up two and position at any time. I held off on it for a few seasons, using it as leverage with Russia and Turkey.

In the east, Russia sided with Turkey, and Italy was pushed back. As soon as Italy went down to four, I offered support whenever he wanted it. Italy essentially directed my units to wall off the Turk from 05-07. This escalated tension – Turkey had nowhere to grow, and Russia wasn’t keeping pace with me up north. I encouraged Turkish stabs and promised we’d divide Italy once Russia was weakened, but Turkey never made sufficient progress.

I stabbed Germany in 1906. Russia, frustrated with Turkish antagonism, pulled his fleets from the north, meaning that I would eventually get all of Scandinavia. This gave me a free tactical walk to 14. To pick up the remaining 4 dots of Tunis, STP, Munich, and Berlin, I had to negotiate.

It had become clear that I was going to top the board. In speaking with Erik, I said that I’ll get to 16 or so, but had no chance at 18… thus, he might as well get as much as he could. You play to win the game/tournament, after all! By encouraging Turkey to play to win, he destabilized a locked up Mediterranean and stabbed Italy. This allowed me to get position to take Tunis. 15.

Once I was clearly going to take Tunis, I went up to Braden and told him that I was absolutely going to solo… but he could make it go a lot faster. The grand alliance did not do a good enough job of telling him he was important and needed to stay onside, so he went with it. Though he waffled, the “let’s finish this” pitch continued until the end of the game, netting me Munich and Berlin. 17.

STP was actually the easiest to take… it just took forever because I kept mis-ordering F-ECH to MAO instead of North Sea. Once I got my fleets over, I took it. 18.

WHY DID I SOLO

In a word, negotiations. Solid tactics, a strong alliance, and good strategic play got me to 14. What put me over the top was maintaining fluidity around key supply centers on the line. If Turkey and Russia get on the same page sooner the solo doesn’t happen. If the grand alliance does a better job of selling Germany the solo doesn’t happen. The board dynamics were off just enough that I was able to capitalize.

Mathias (Austria): The key is a trust exercise. Unfortunately, it didn’t pay off here. Not much that can be done about it.

Dan (England): Great playing with you, just ended up feeling I had better odds with Braden. It’s a tough situation when a strong FG hits you, especially when Russia doesn’t hop on board to help right away. Look forward to seeing you on another board.

Jake (France): Your last two french results… a 1902 elimination and a solo. Weird flex, but ok.

Braden (Germany): First, I am forever grateful and am reclining on the pillow we discussed now. Was very impressed by your strong alliance play in this game… you just left yourself a little extended tactically, but absolutely showed that you are a strong partner. Look forward to playing together again soon.

Matt (Italy): Great to be on a board together again, and great working together.

Jorge (Russia): I thought we had a really strong partnership in the north… certainly negotiated well. What I admire about your game is how smoothly you play. Let’s do it again soon!

Erik (Turkey): Lot of fun playing together on this board. You took a big risk working with Italy in 1902 and that really paid off – very impressed with that early board read.

I really enjoy playing Russia, and I generally love to open North. In this game though, I didn’t know my neighbors very well so I figured it would be best to play it safe. I talked with Austria and we arranged a DMZ in Galicia, and then talked with Erik and arranged a bounce in the Black Sea. When it came down to write my moves, I decided to hold in Warsaw as my spidey senses were tingling. As it turns out, Austria broke the DMZ in Galicia and moved to Rumania, so it made my decisions very easy. I grabbed Austria, who basically said that he had purposely lied but that I wasn’t the target of the attack. I wasn’t sure what that meant at first, but eventually I pieced together that it was a Key Lepanto. I told Matt and Erik flat out that because of this stab I would not work with Austria, which I think convinced the two of them to eliminate Austria with me. We were able to do this fairly quickly as Matthias was a bit out of position. It took a long time, but I eventually convinced Erik to DMZ the Black Sea. I didn’t want to stab him after he decided to trust me with this gesture, so I decided to head north for a northern game. I built a few fleets and pounced on Germany.

I think that this was the wrong way to approach the North. In the North I had not committed to any one side and let Germany/England fight each-other by not taking Norway from England. I figured it would help me later on to have a weakened England and Germany, but all it ended up doing was making it very hard for me and Germany to work together when we needed to. Braden (Germany) really wanted to work with me in the beginning of the game and even gave me Sweden, and I returned that favor by flatly refusing to work with him against England. Later down the line I was actively hurting him by helping England into Denmark. So naturally, he refused to work with me when I went to him and asked to work against Jake later on in the game, citing that I should have worked with him sooner (and he’s right about that). So when I made my move onto Silesia, Prussia, and Bohemia Braden had already prepared for it and defended it completely. I was going to make no progress in the North.

Eventually there came a point where Erik wasn’t making any progress in the Med against Italy, partially due to Jake’s help, and so Erik took Rumania off of me. I think that I overreacted here and basically started a war, when this likely would have been better resolved diplomatically. I was surprised when Erik attacked me, but honestly I should have been reading the board and seeing that I needed to talk to him to get on the same page. This war lasted a few years and put us in a very tough position to stop a French solo.

Overall, I learned a lot of lessons from this game. One big takeaway was that when Germany gives you Sweden, you probably should work with them. Also, you should always be checking in with your allies even when you are playing on different sides of the board. Perhaps if I’d been paying more attention I would have seen that Italy had Turkey stopped. Finally, don’t let your guard down in negotiations with someone on the other side of the board. I think Jake was controlling my subconscious through negotiation a couple of times, and I didn’t even realize it until later.

I played as Turkey. After partially blocking a Key Lepanto, I offered Italy (Matt Sundstrom) Greece to vacate the Aegean and worked with Russia (Jorge) to eliminate Austria (Matthias). Meanwhile France (Jake) and Germany (Braden) were progressing to England’s (Dan) detriment. My best position was at 7 centers (Russia was on 9, and France on 7) with good relationships with remaining players on the board. I made the first bad move in the game-despite Andrew’s warning to avoid this in Chris Martin’s WDC 2016 recap videos-and 1 center stabbed Russia for Rumania and the Black Sea (sometimes you just have to experience making the bad play to understand??). When Russia (Jorge) pulled two units in the north, rightfully so, I was out-tacticked by Jorge in the ensuing years. Meanwhile Jake made good progress in the west, eventually soloing.

Regrets: Not realizing I’d avoided being an early target (Bul-Ser bounced Italian Tri-Ser leaving Italy in Trieste and Austria with a single build), which was good, and seeing that a three-way (France/Russia/Turkey) or five-way draw (with Italy and Germany) was probably a decent outcome for Game 1 in the tournament. FAR better than inducing the solo. I take my share of the major responsibility for that happening, but of course taking nothing away from Jake’s skill in converting (and encouraging me to stab Jorge. 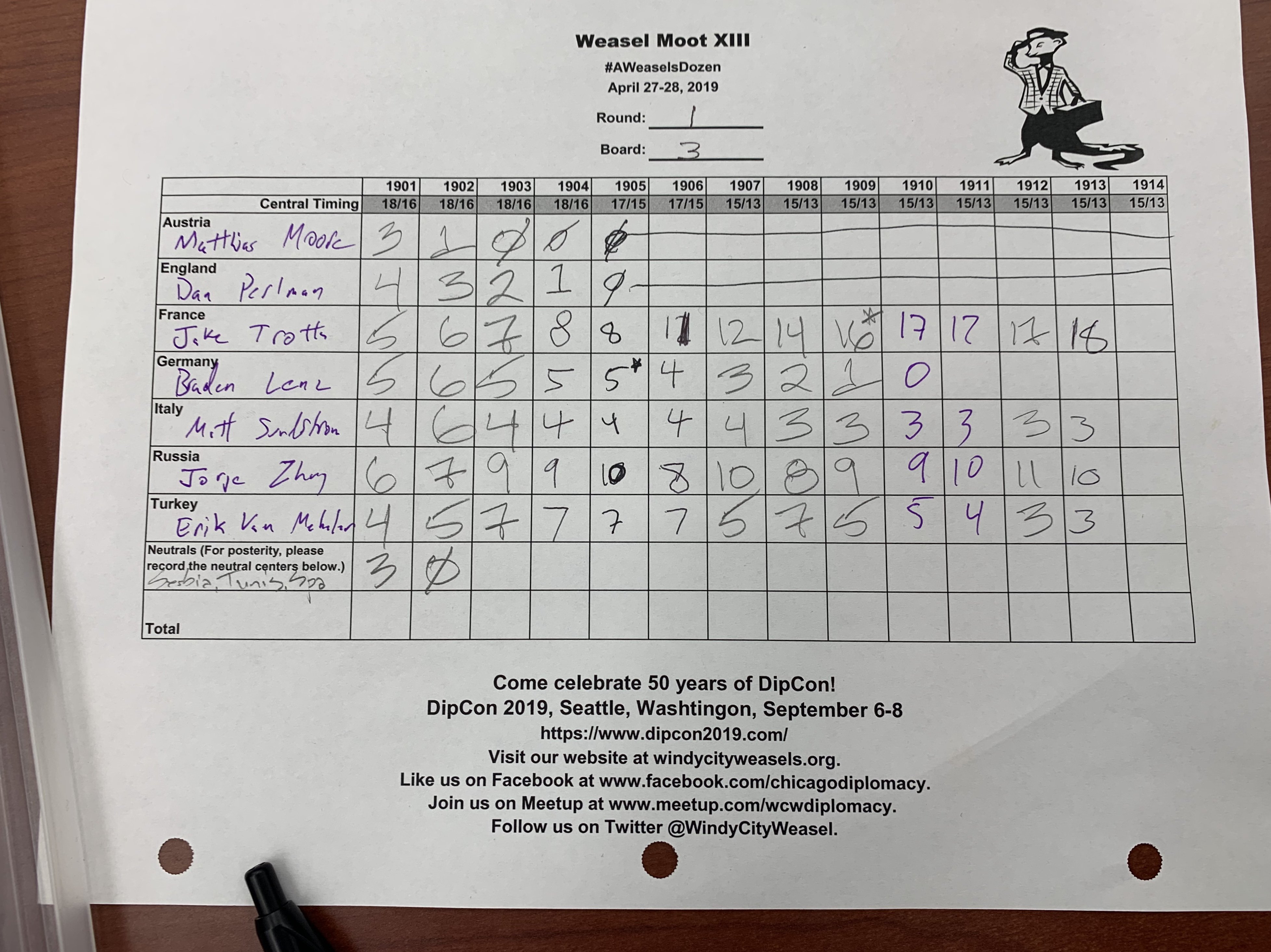 F01 board picture is not available. 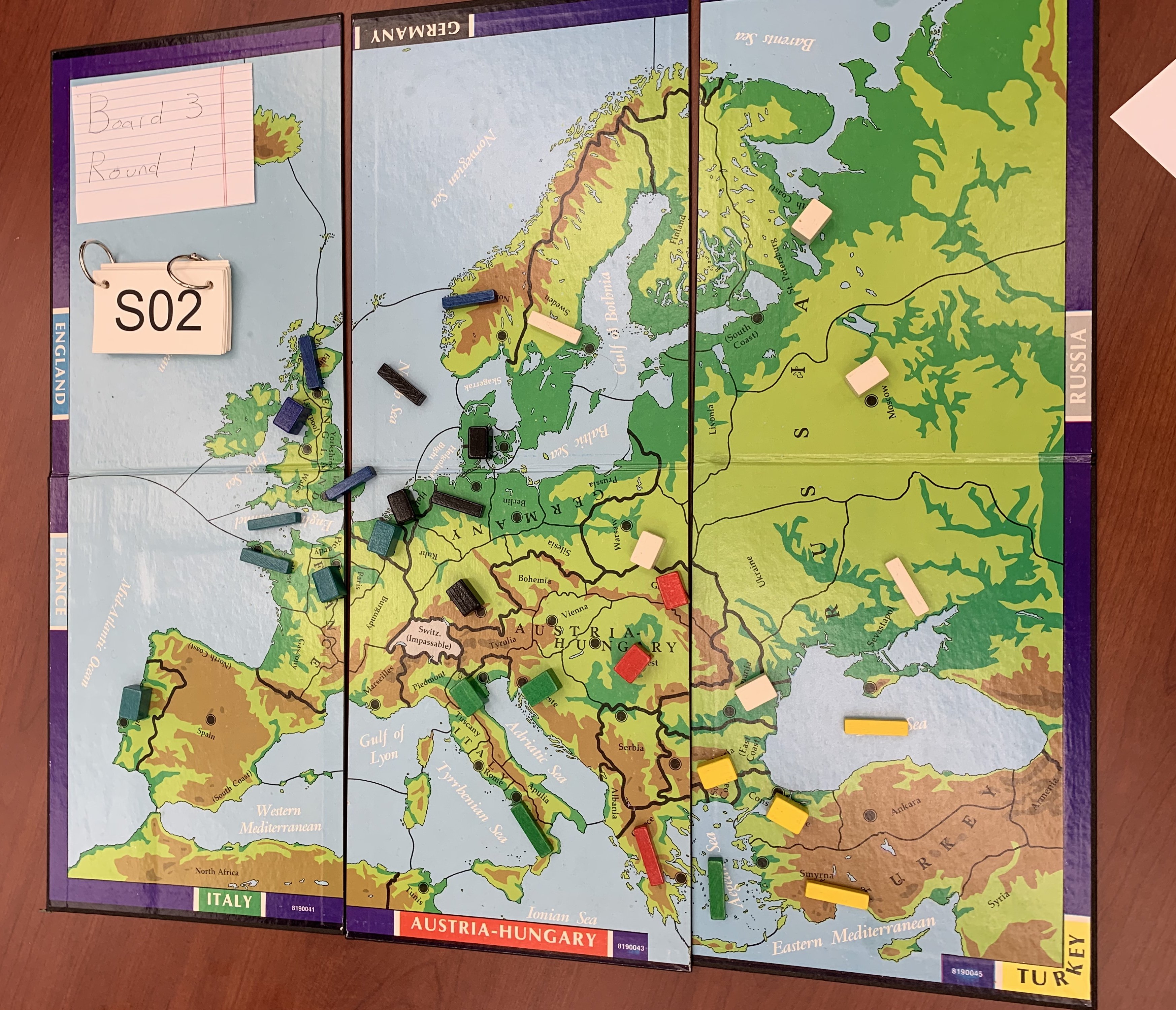 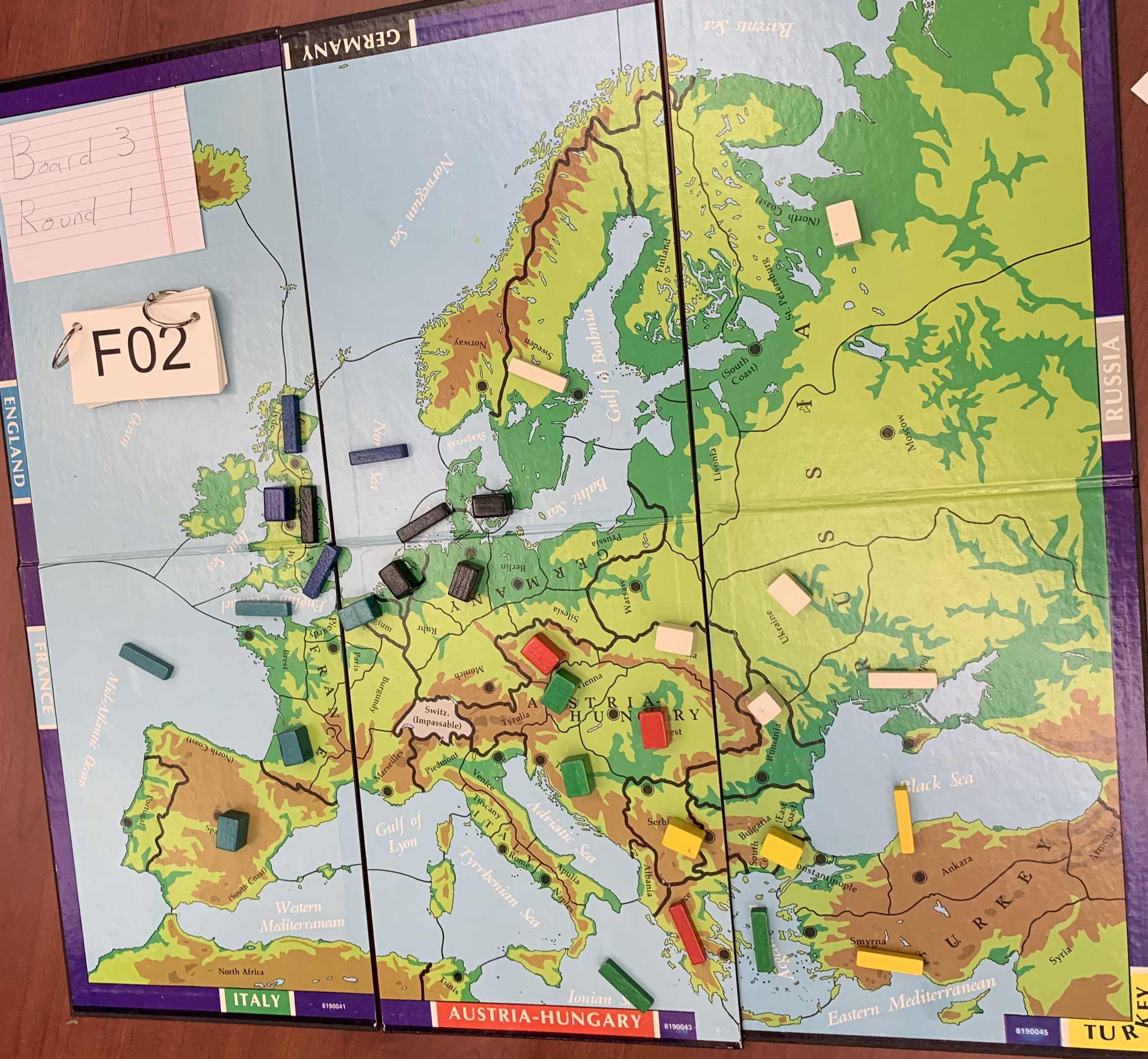 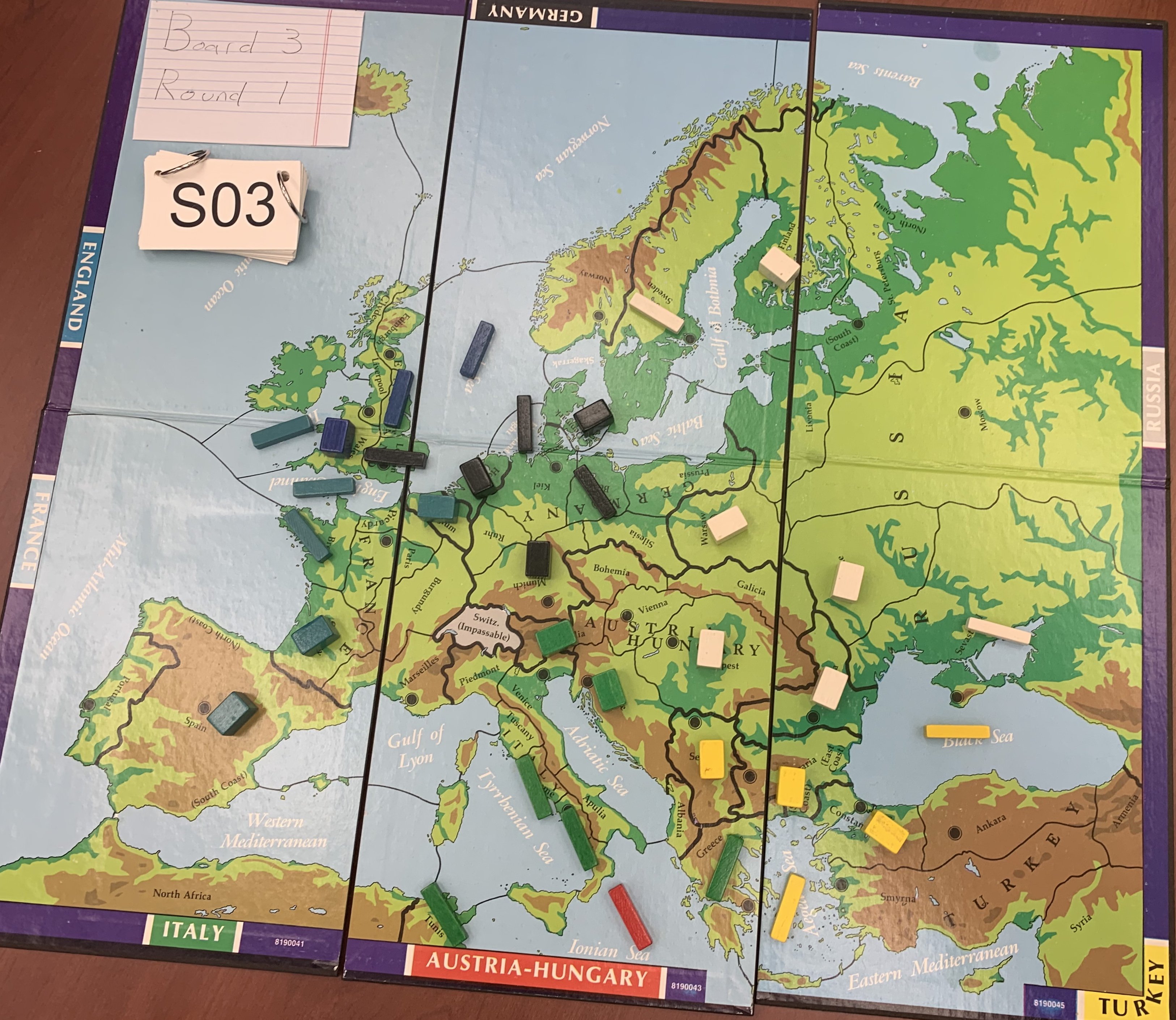 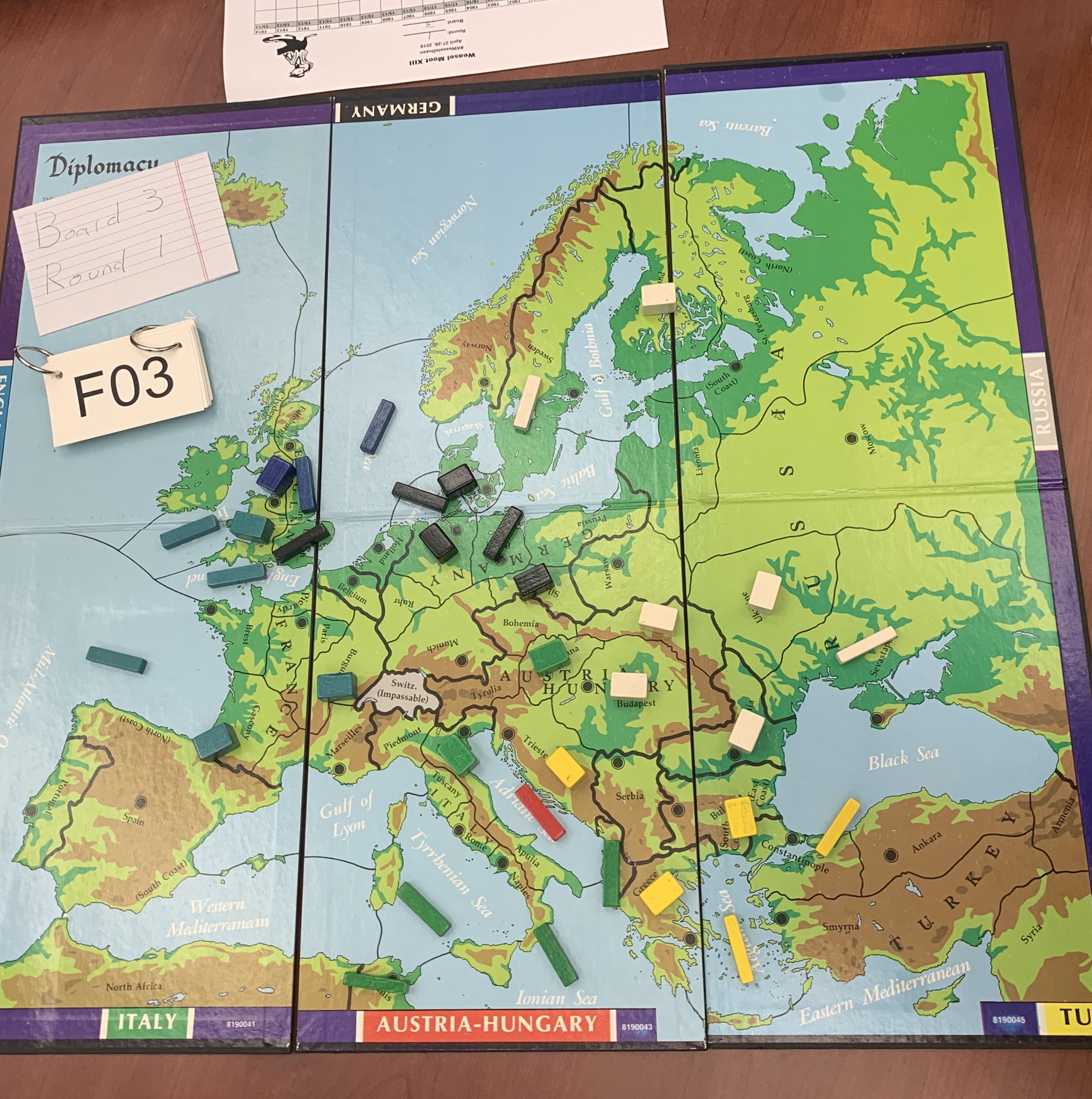 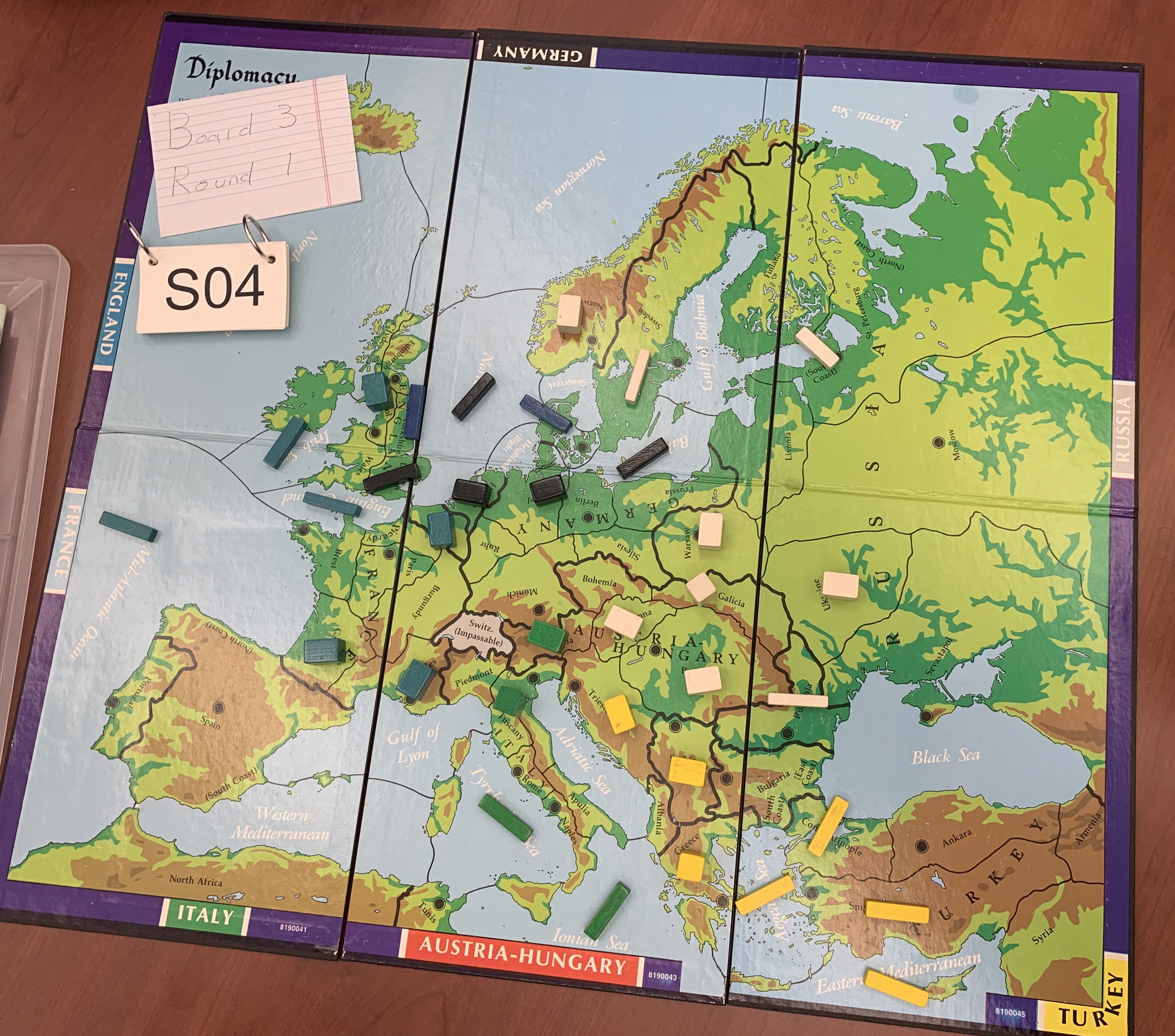 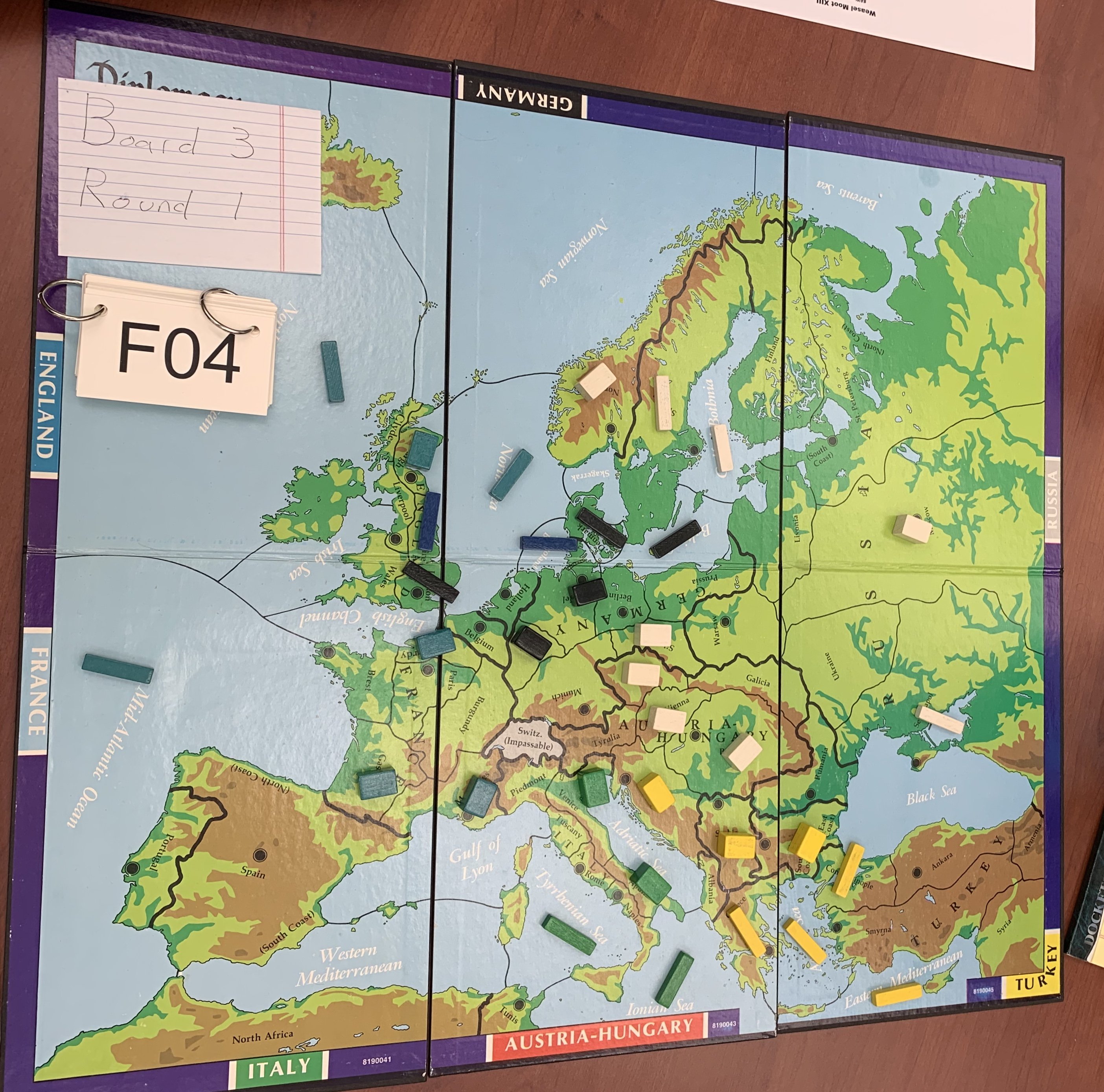 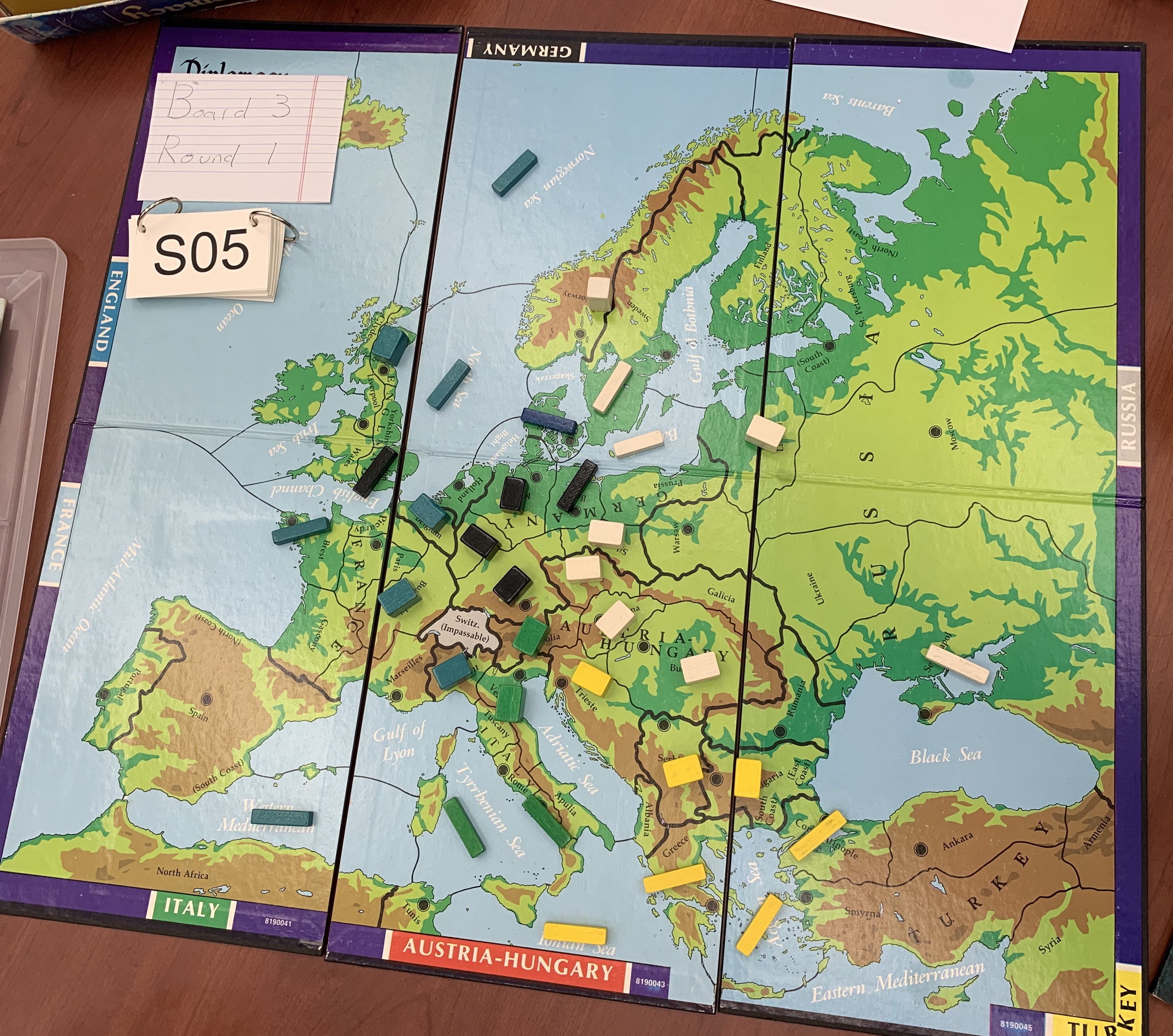 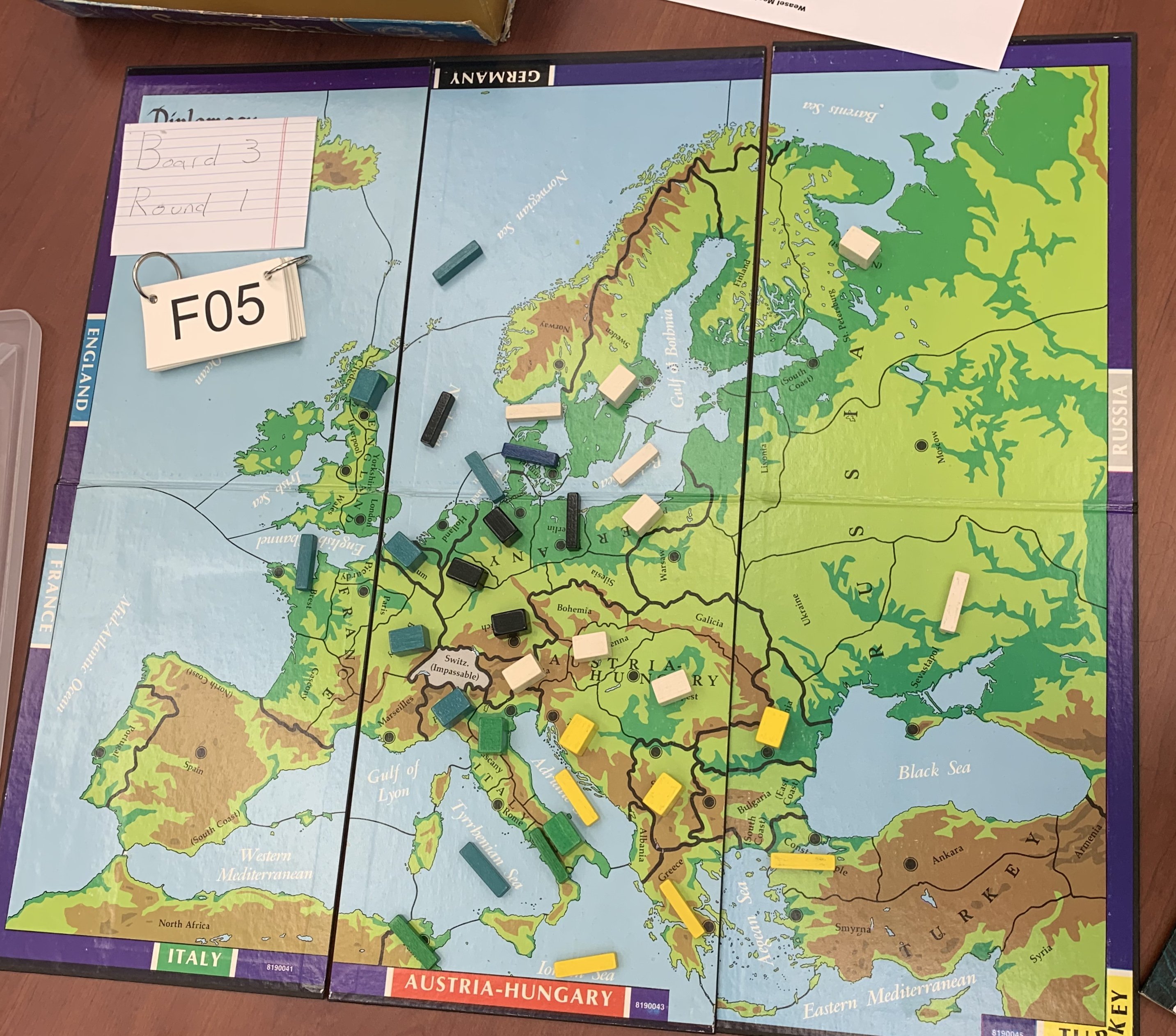 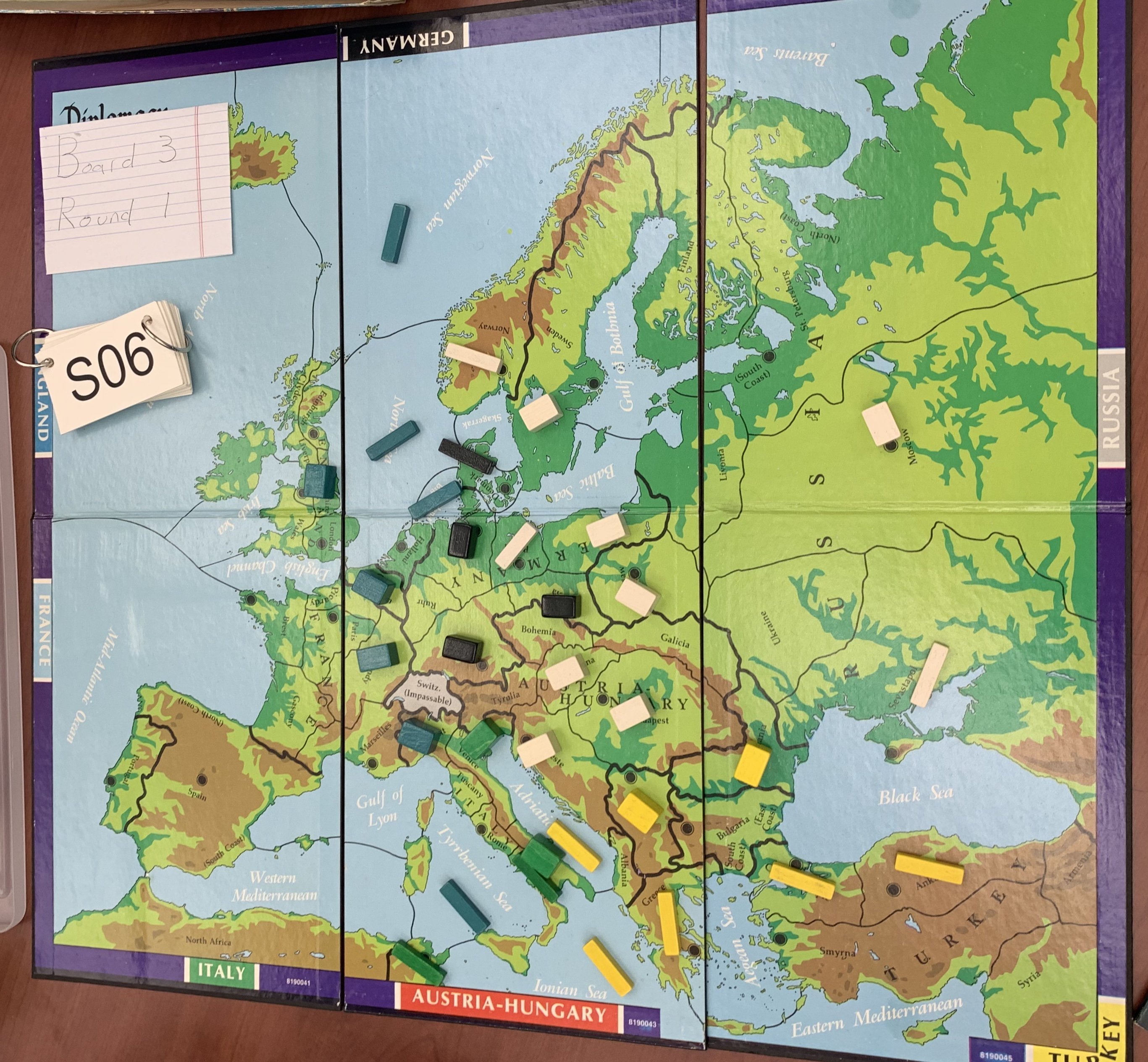 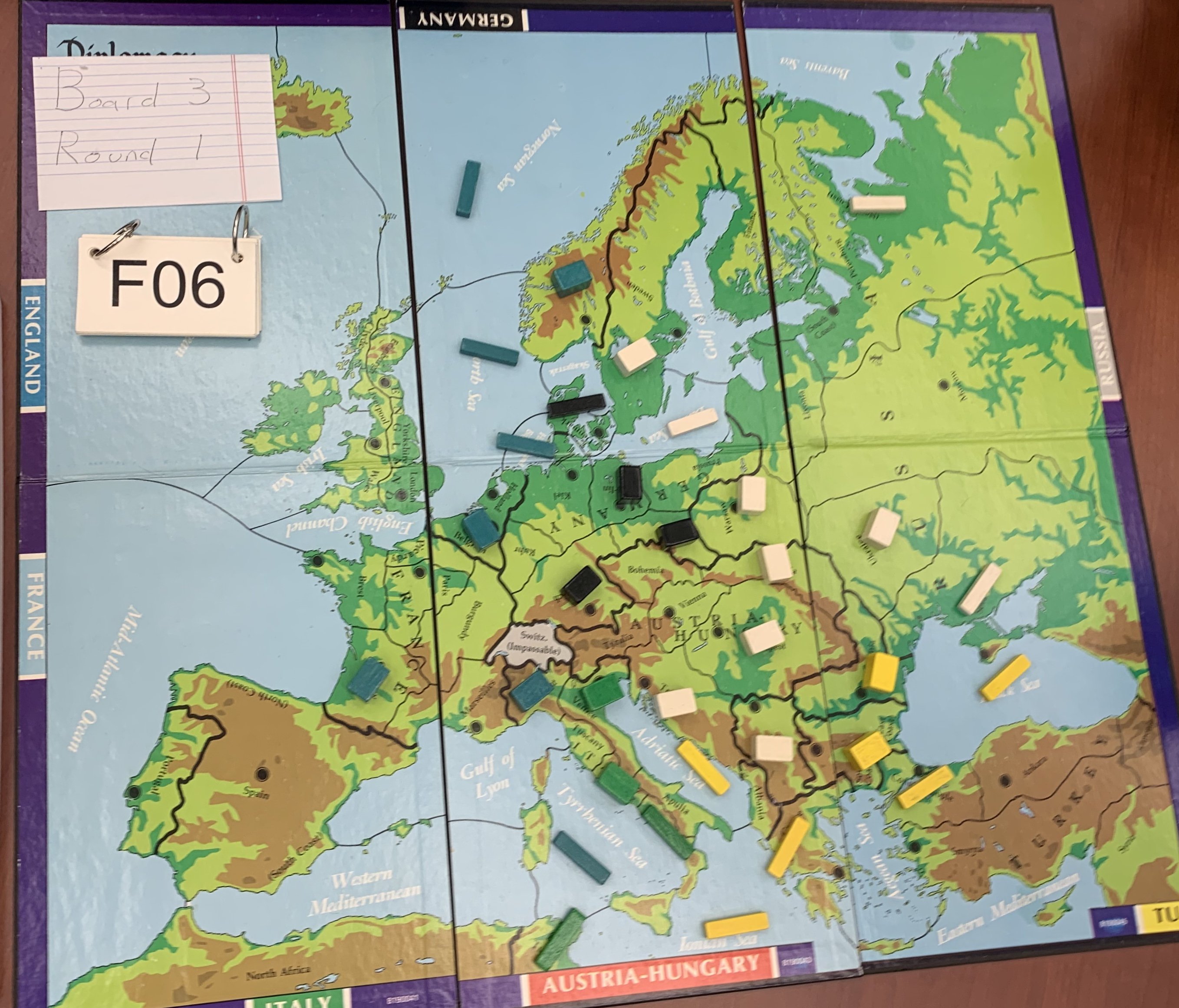 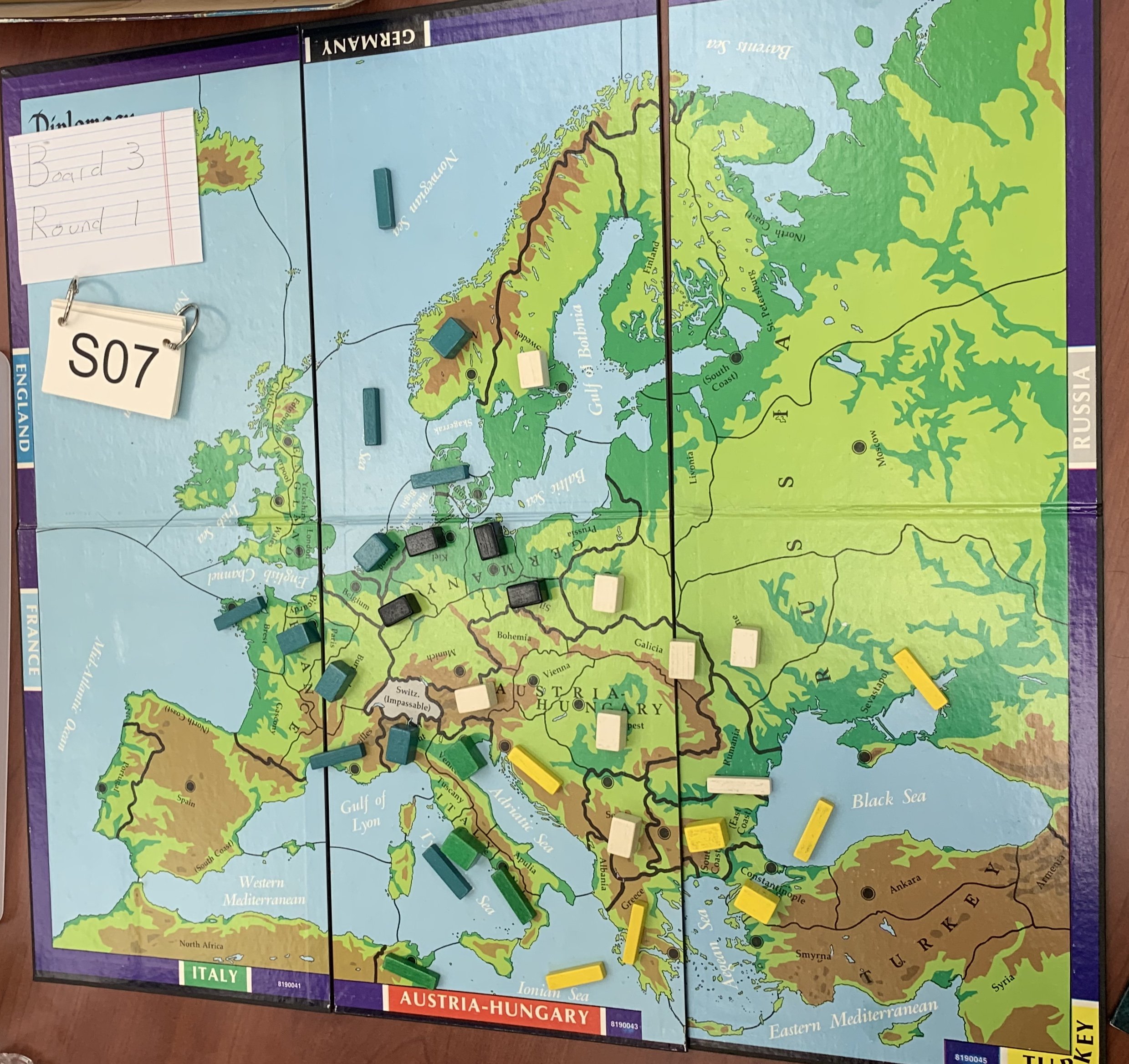 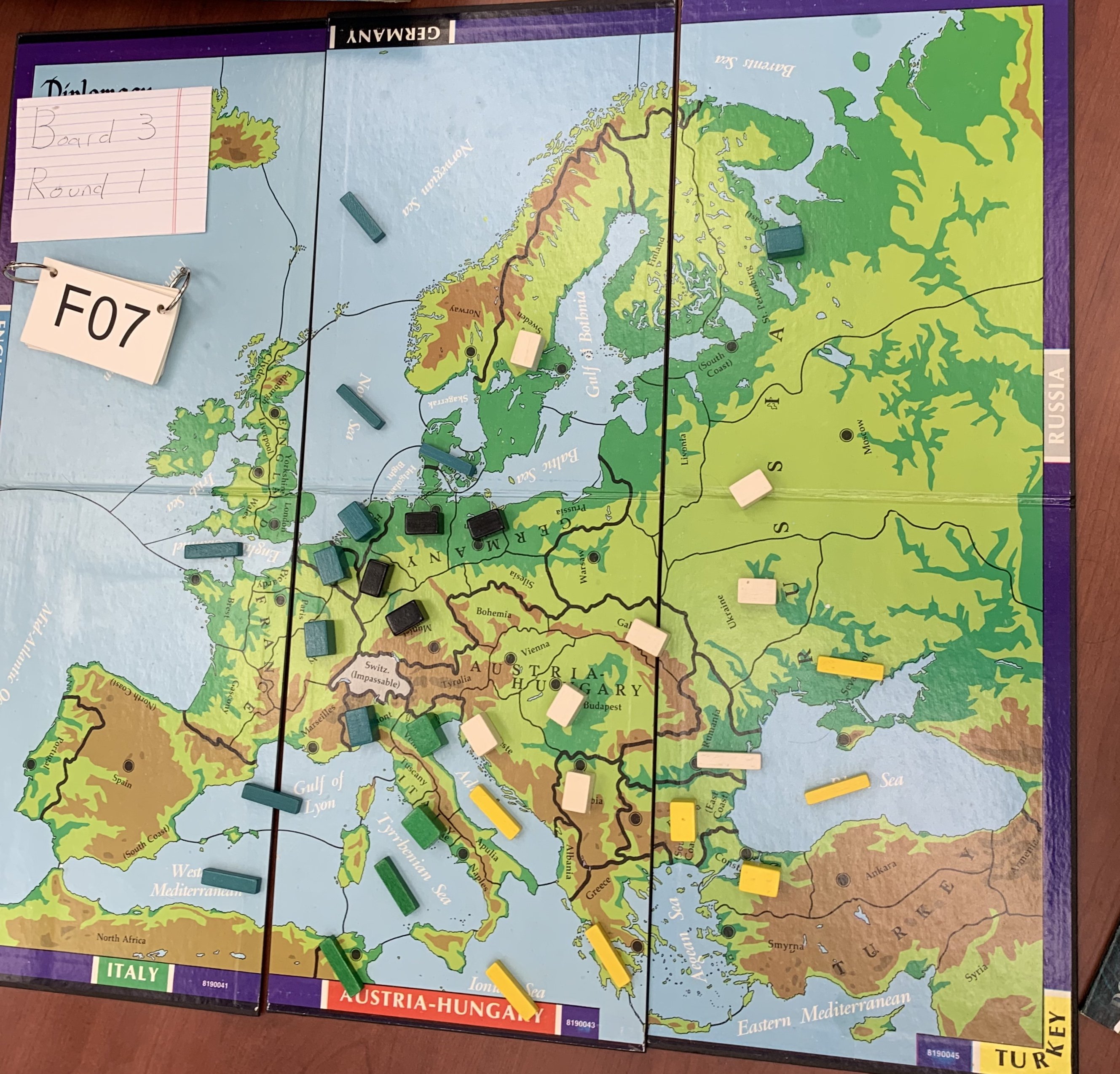 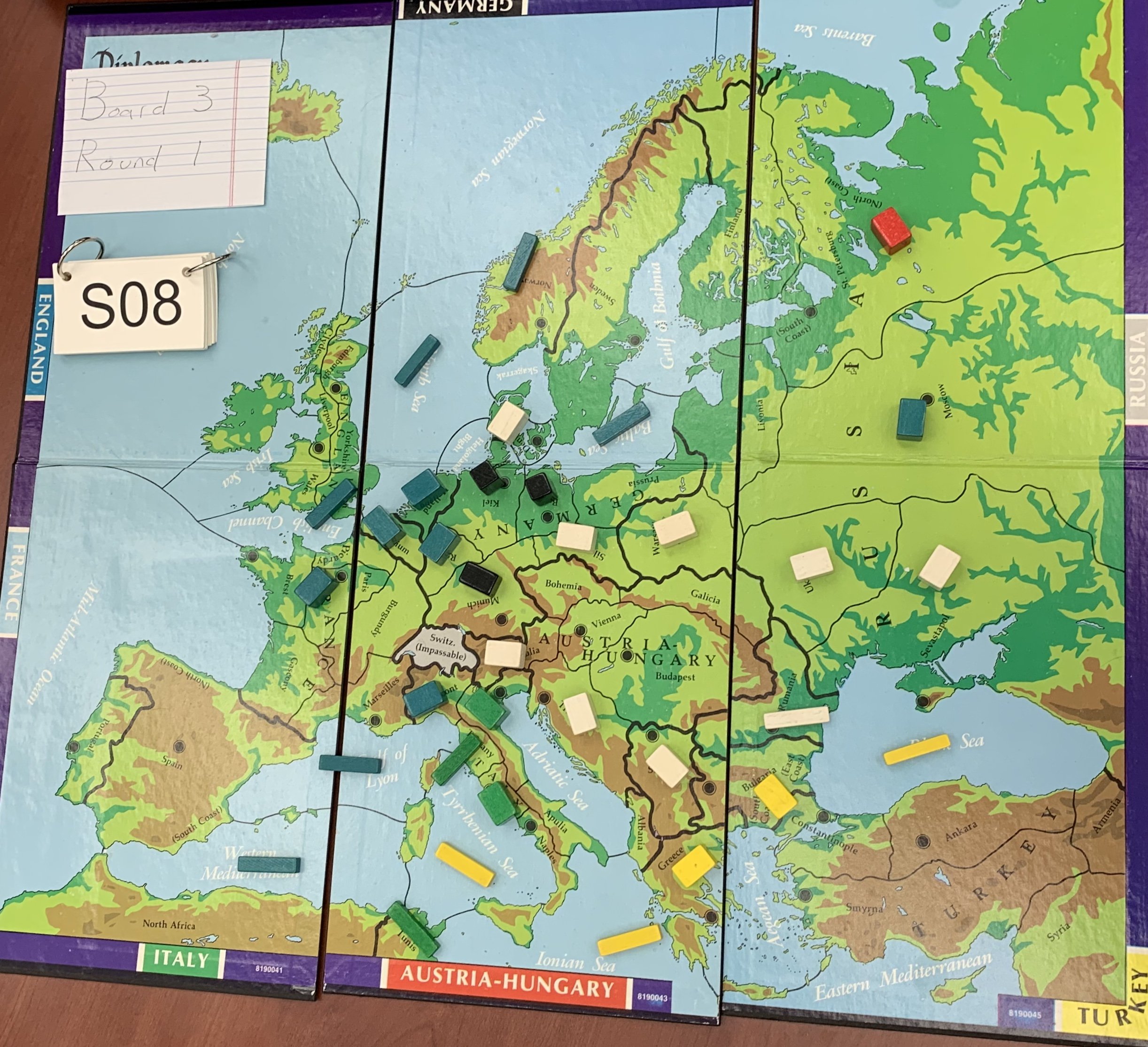 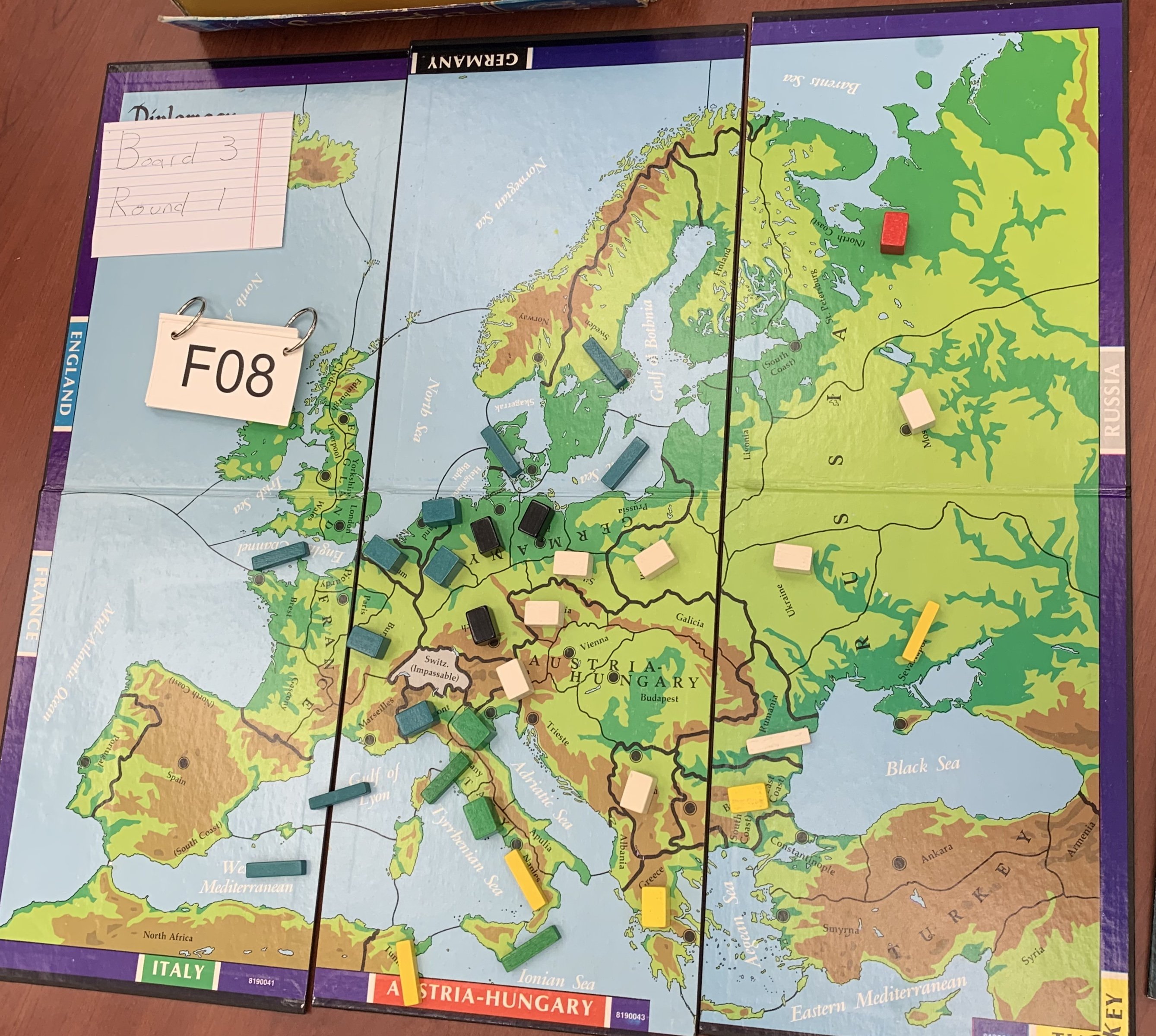 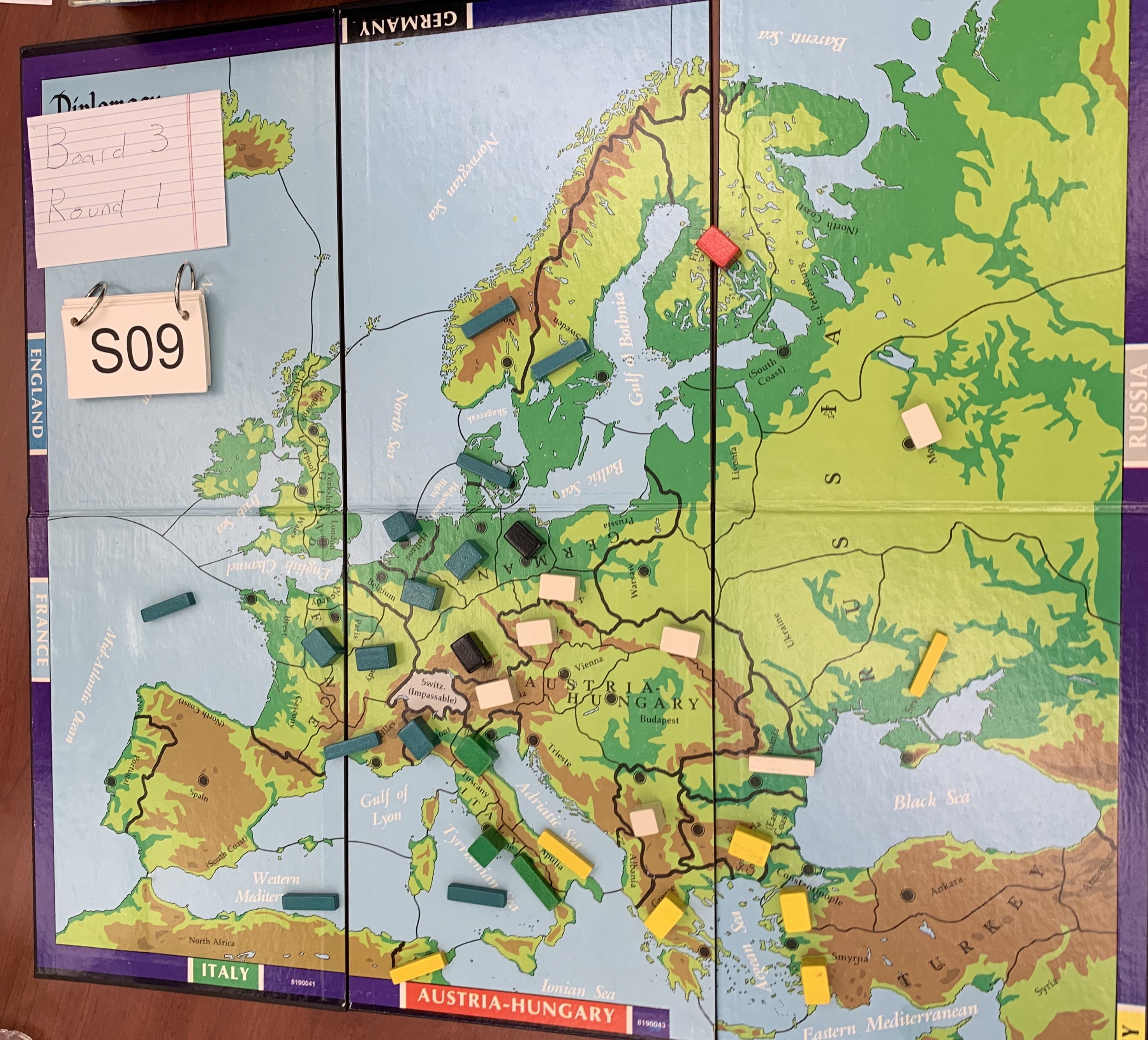 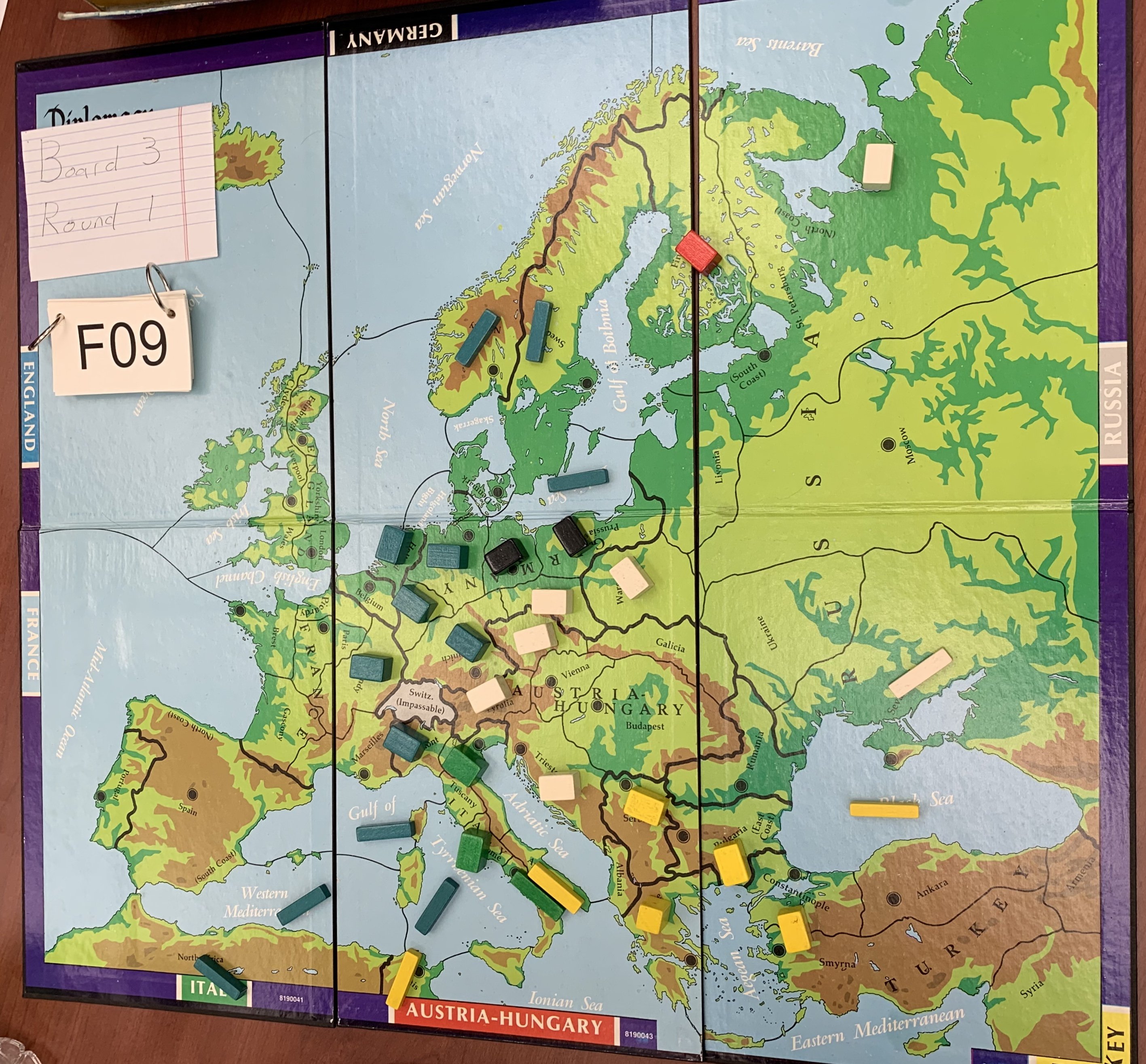 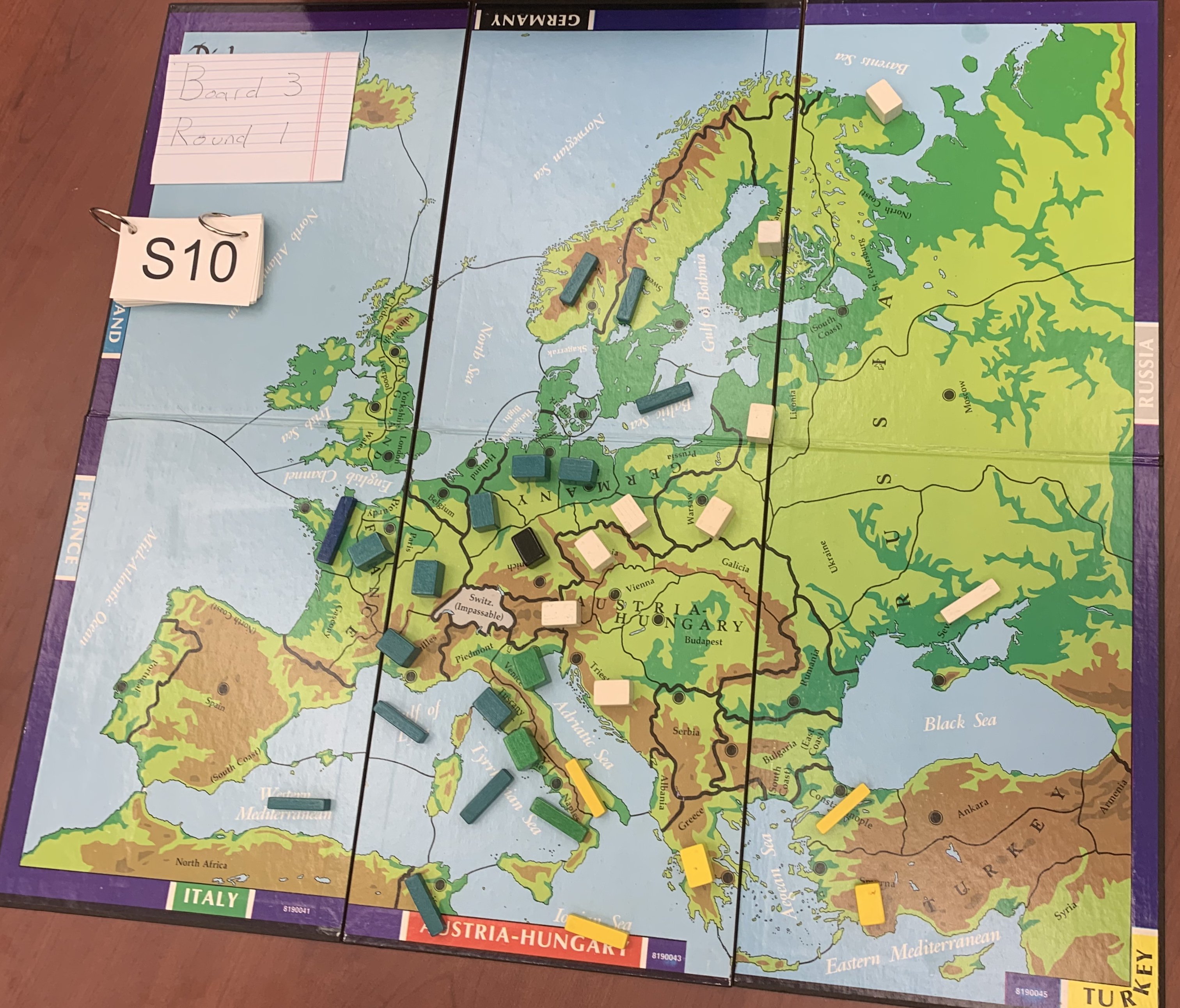 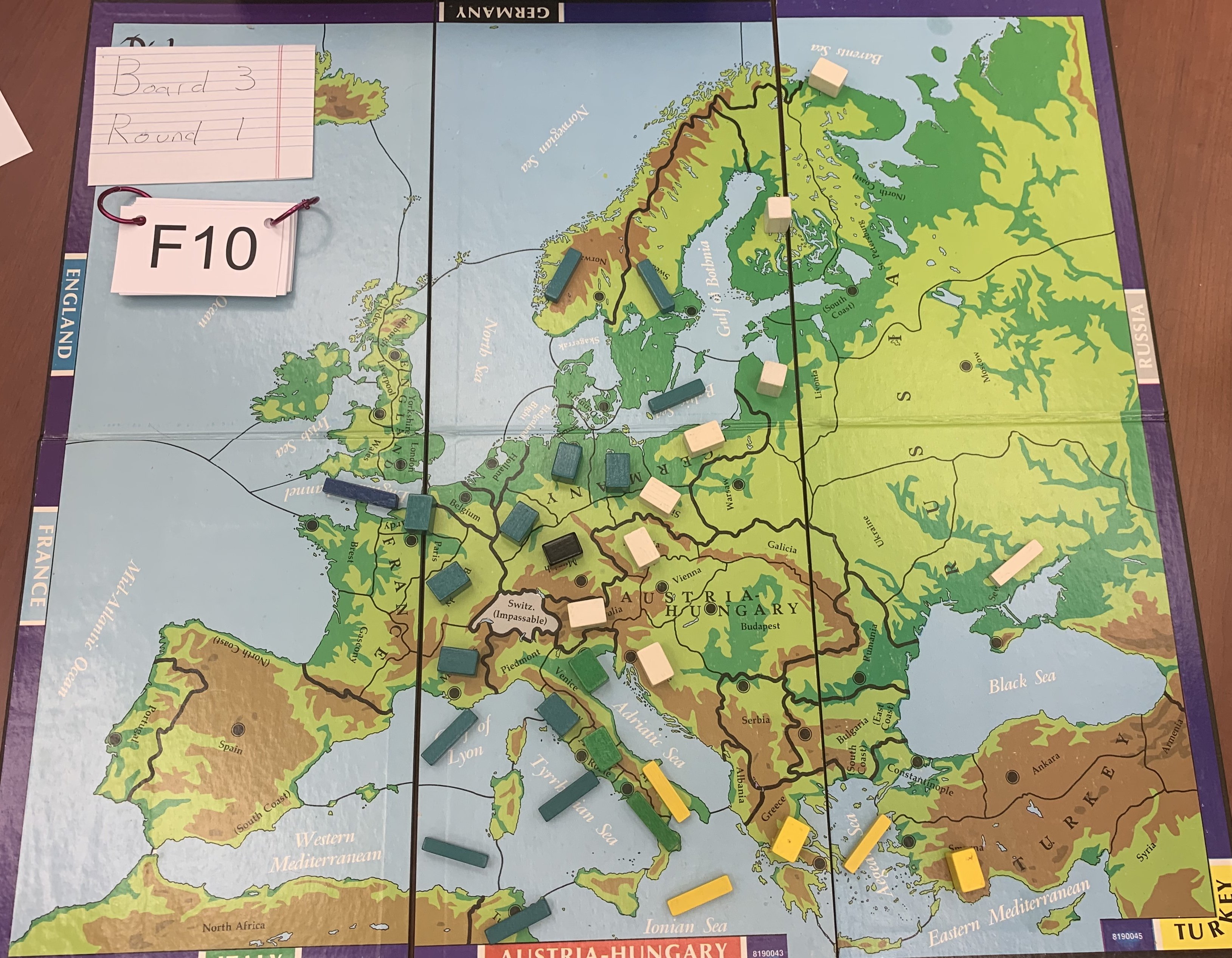 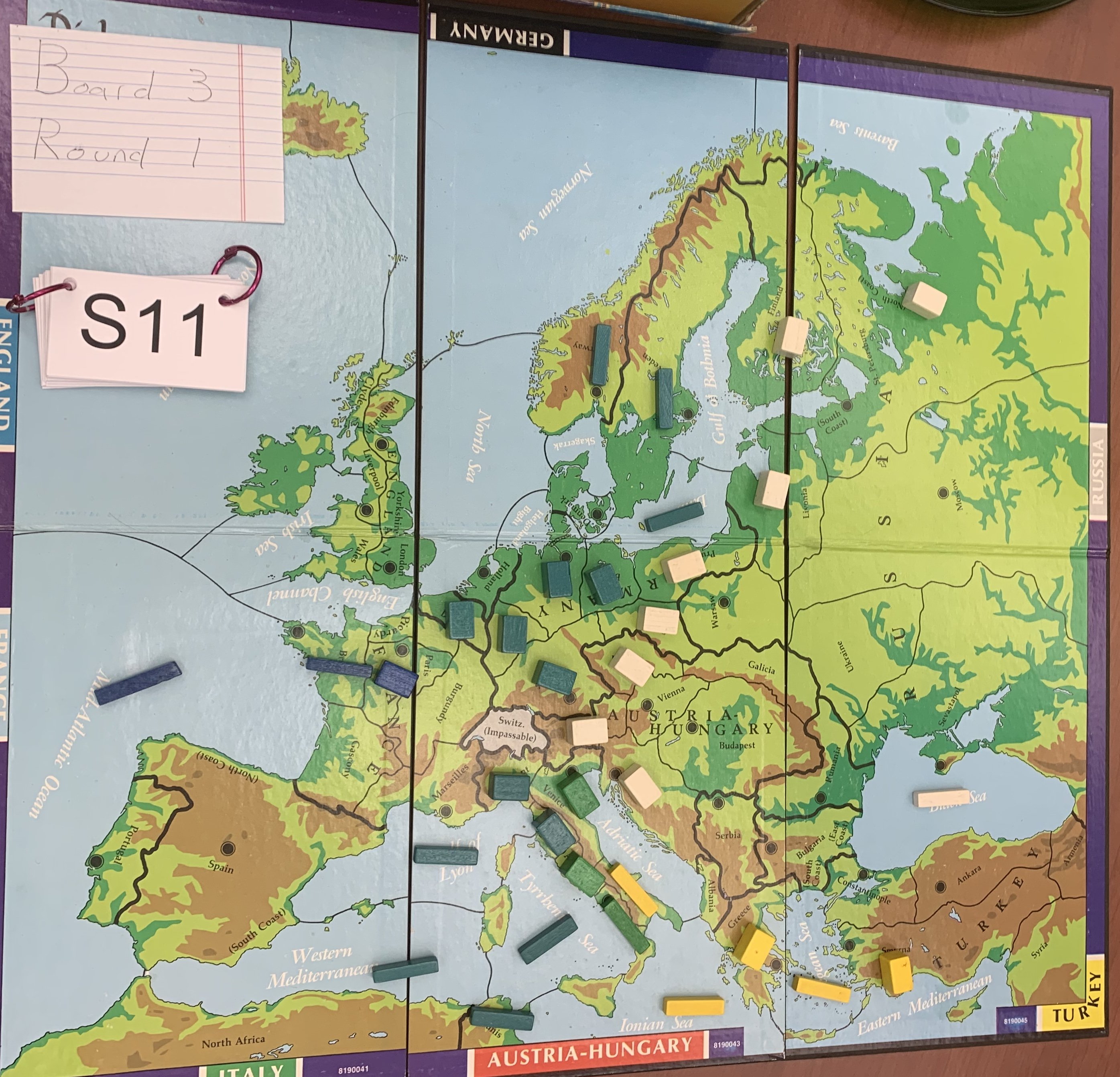 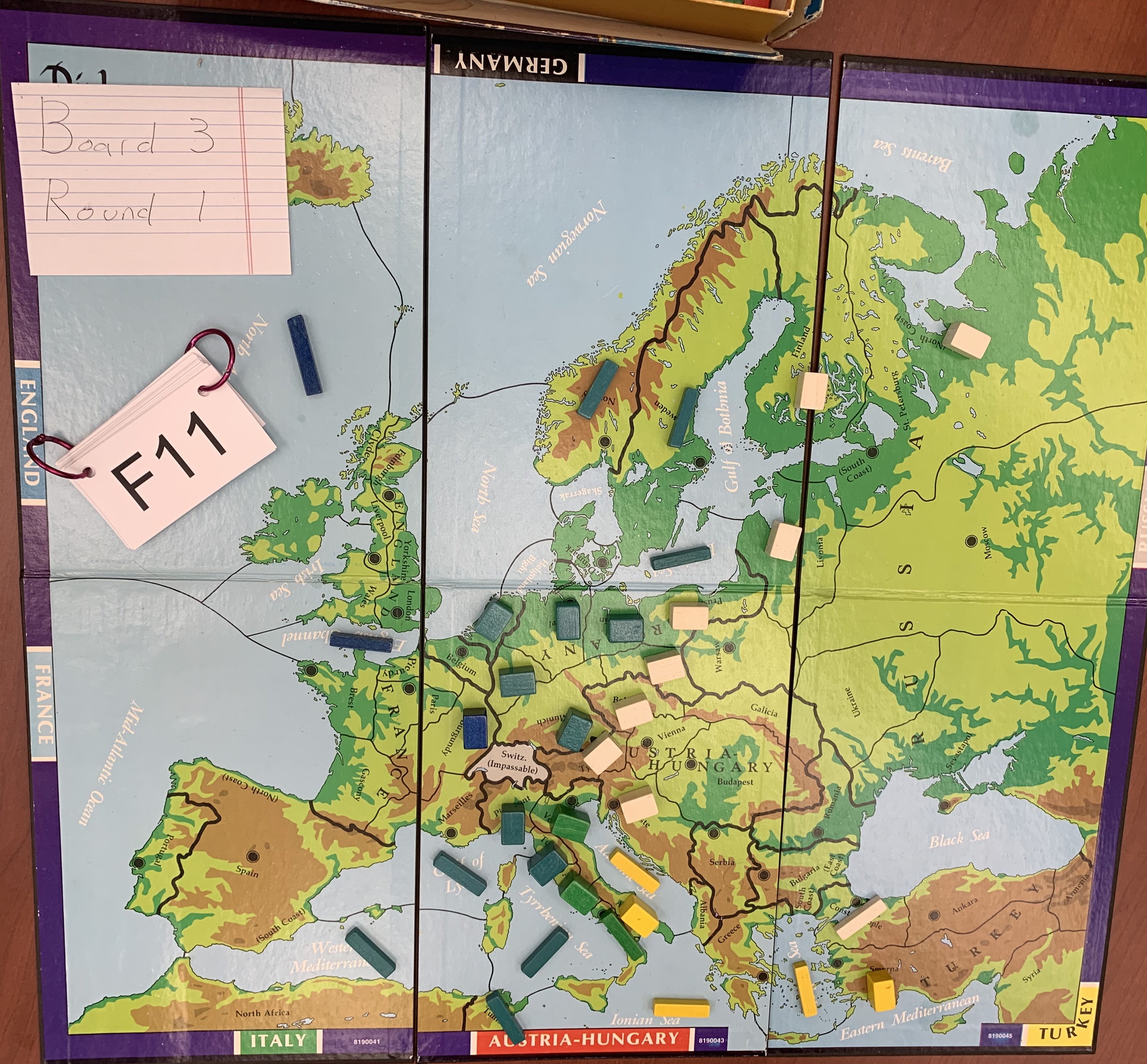 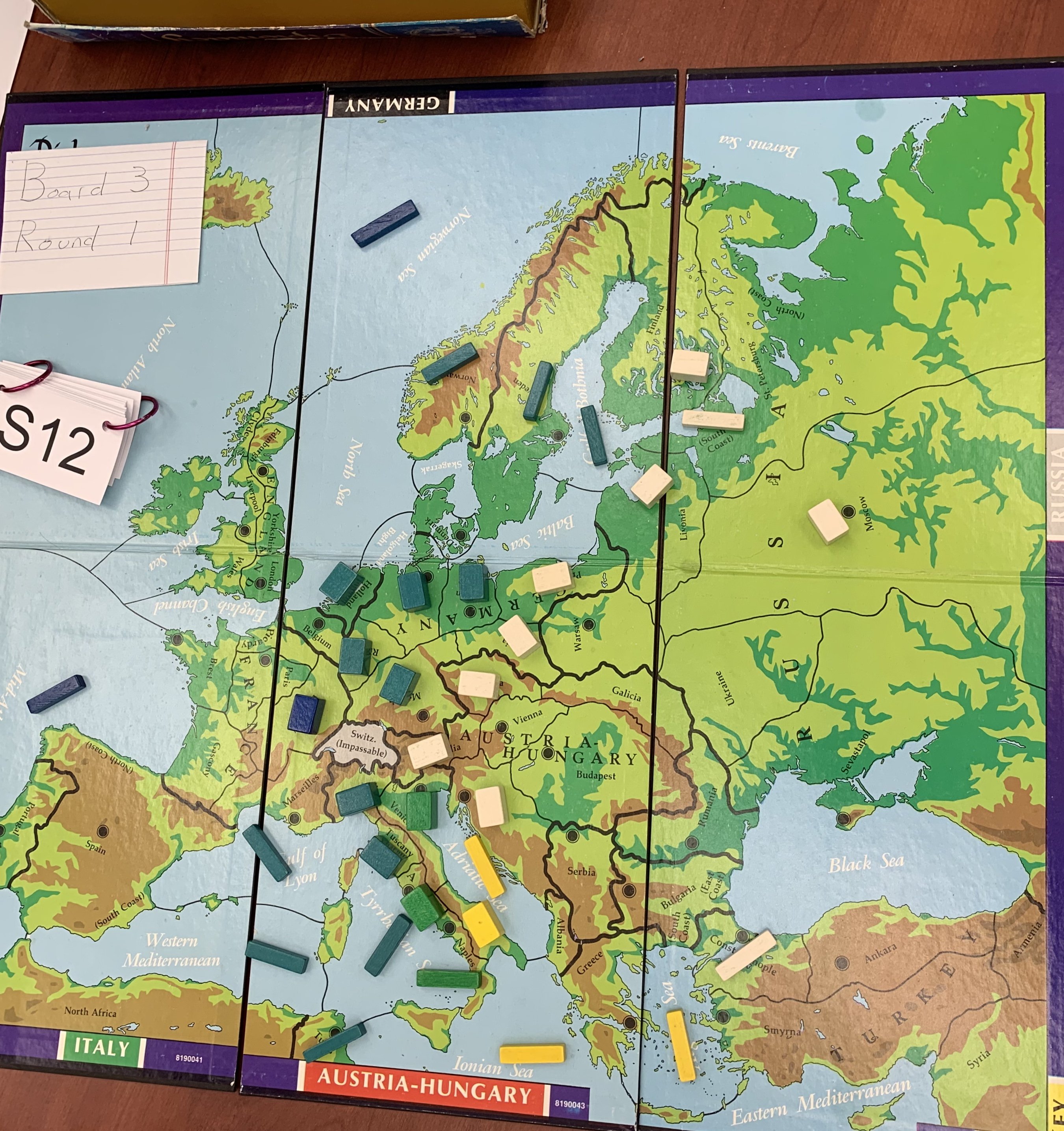 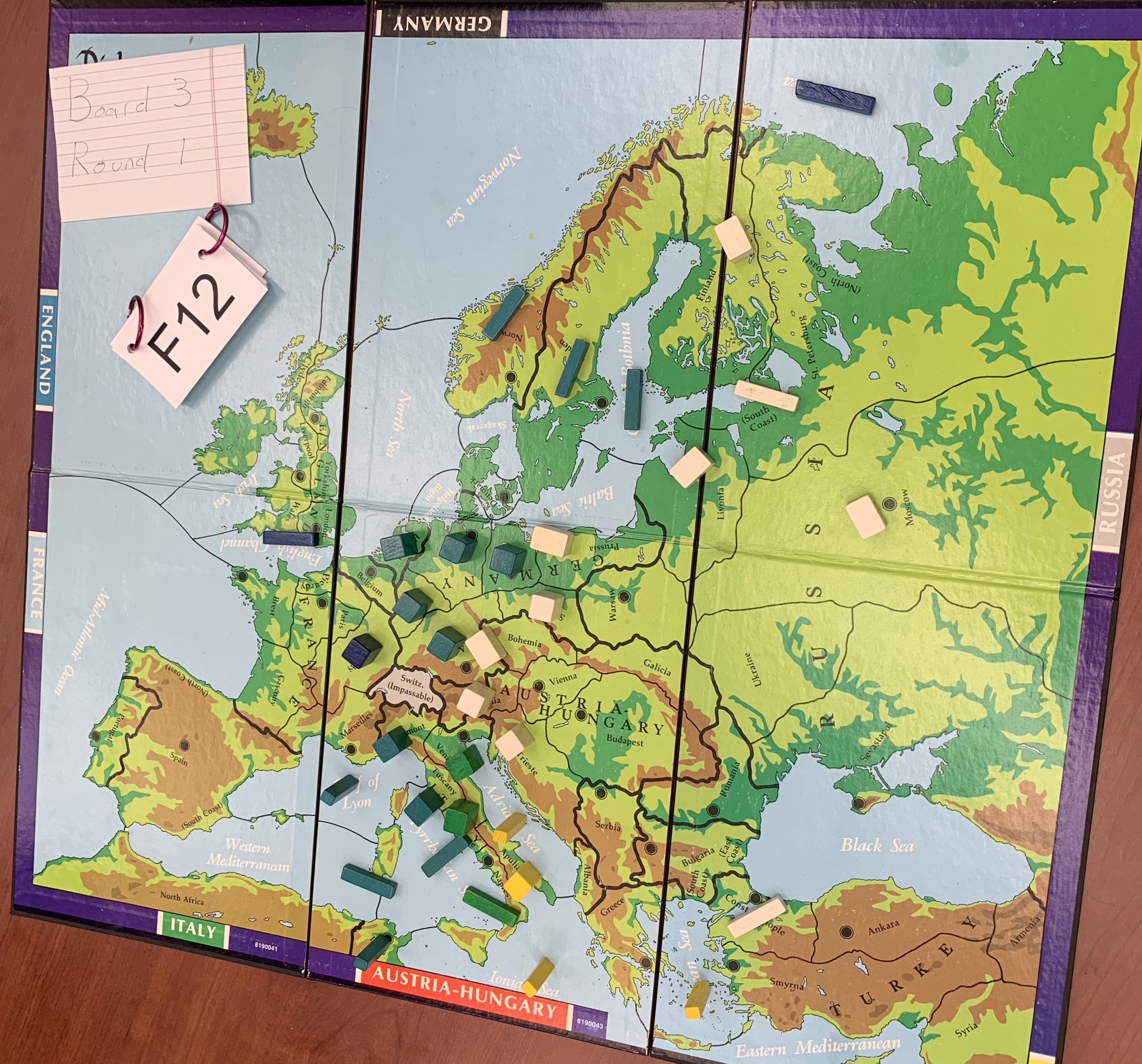 S13 board picture is not available.

F13 board picture is not available. 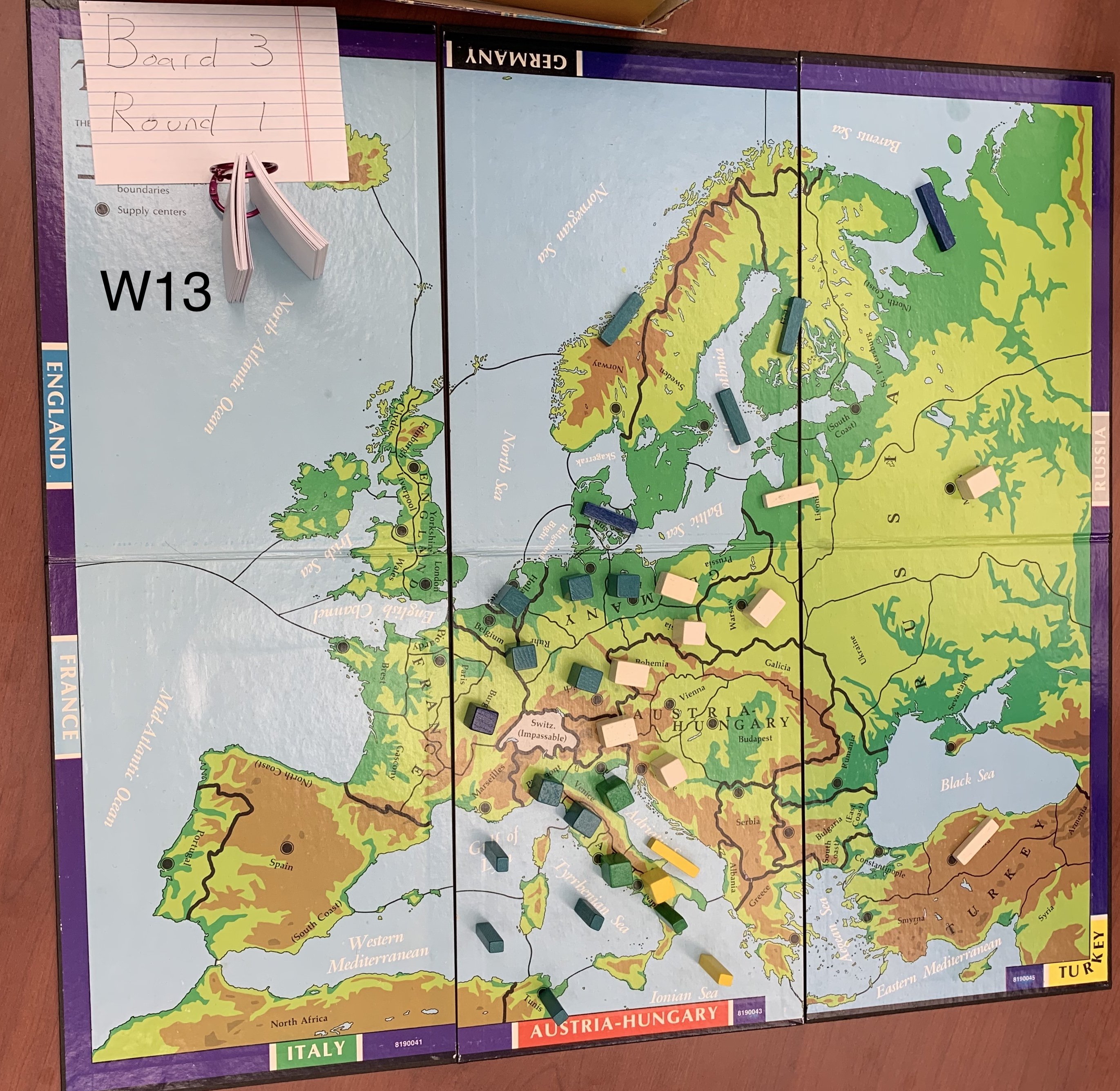 A season so great it almost didn’t end

Perhaps it’s fitting that our ninth season of Windy City Weasels Diplomacy didn’t end until it had to. Game No. 250, the second of three

We’re back after a brief hiatus for Thanksgiving. (Hope yours was a good one.) Read on for the latest news from the Weasels. Chicago in

Two boards. Two John Gramilas. Two hours into our Opening Night for the 10th season of Windy City Weasels Diplomacy, and I was seeing double.