This game was straightforward after the early game, so I’ll spend all my time there:

All tournament long, I had made it my goal to spend less time talking, and more time trying to understand what people were telling me, both vocally and through their body language. France (Brian) seemed to brush me off in our first conversation but looked engaged when he was talking to England (Matt Sundstrum). I took that as a sign that I should buddy up with Russia and Italy.

It was then that I made perhaps my biggest error of the tournament. I called Christian (Russia) over to me and told him that I would love for him to get involved in the north, and he would have my full support up there. He seemed receptive.

Just one problem: at the end of the conversation, I looked up and realized that I had been talking to MATT SUNDSTRUM the whole time! Embarrassed, I grabbed the real Christian and had an identical conversation.

As luck would have it, Sundstrum (England) listened to the advice I had accidently given him and sailed his fleets into Barents and then St.P in 02. This earned Christine’s wrath, which meant I had his support in the north as I had wanted all along. Failing upwards if I’ve ever seen it.

Meanwhile, Christian had dropped a fleet into the English Channel, infuriating Brian, who suddenly became more interested in talking to me. In Fall ’02, Brian leaked a fleet into Irish Sea, while I took Belgium and North Sea off Matt in one fell swoop.

I spent the next couple of years picking up easy gains off England while the rest of the board couldn’t seem to stop provoking each other. I’d be interested to hear from Kevin O’Kellly (Turkey)’s perspective what went down there. All I know is that despite a lot of talking, there was never a single cooperative effort between two or more players to prevent me from getting 18 centers. In fact, during my run of the board, every single player except Brian offered to support me into somebody else’s center at least once.

Takeaway from this game: 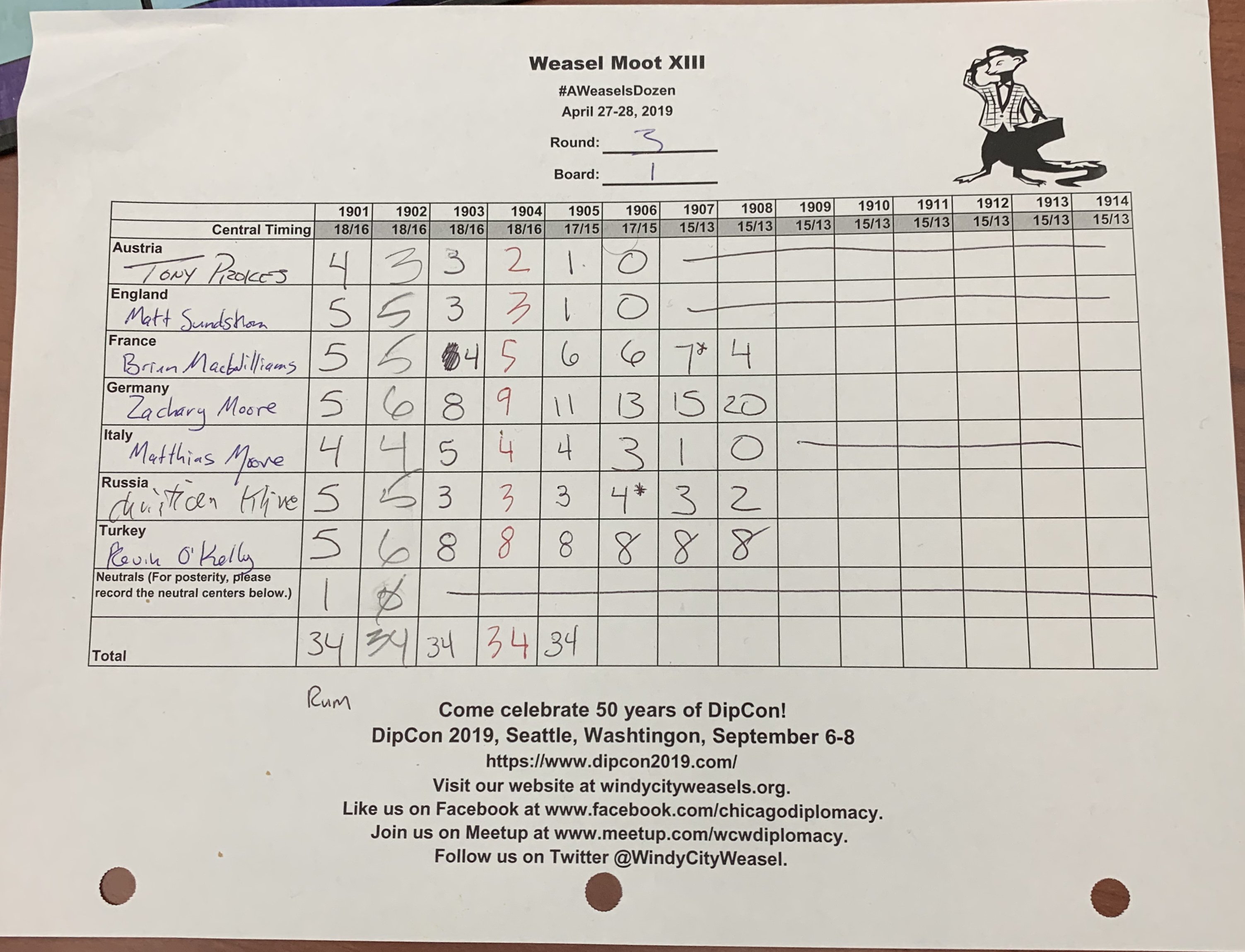 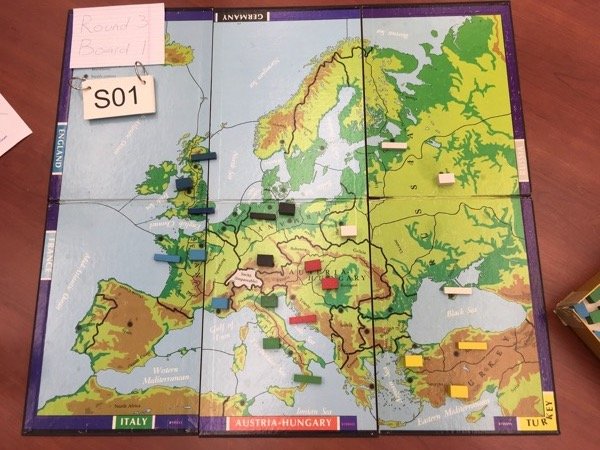 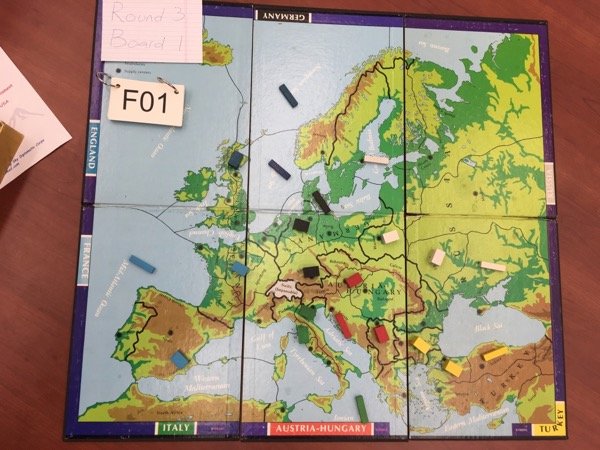 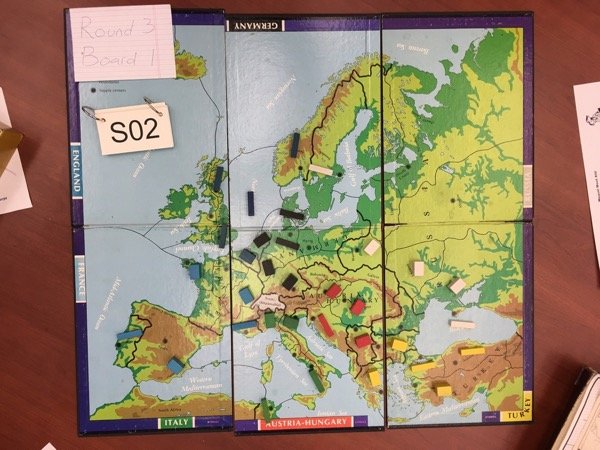 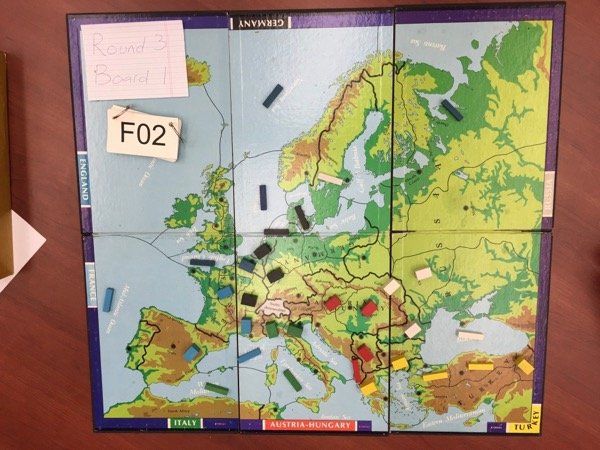 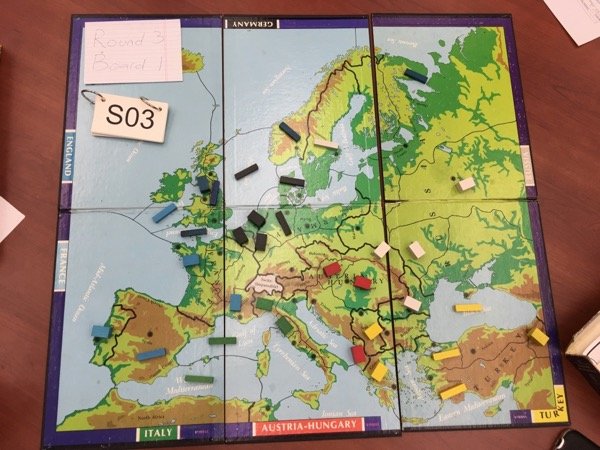 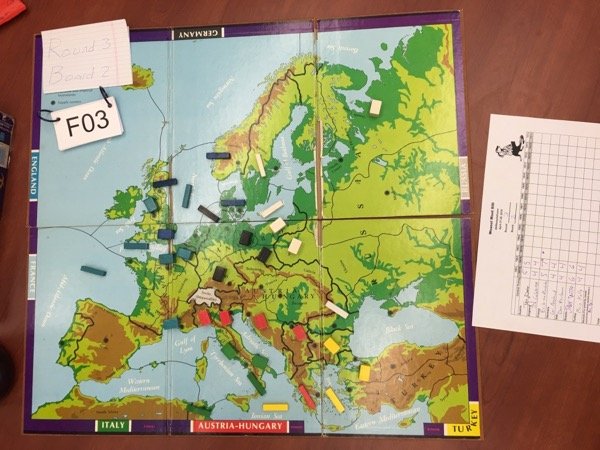 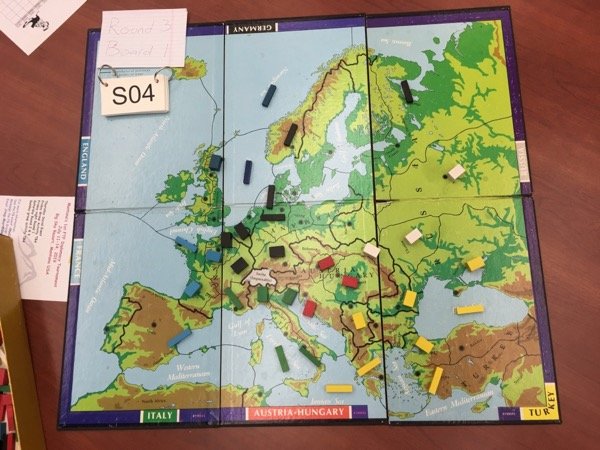 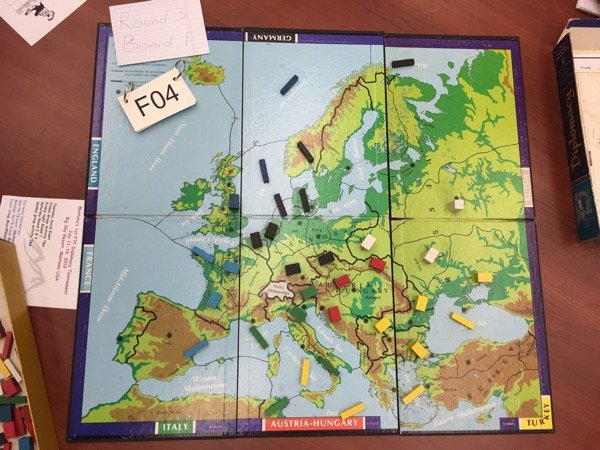 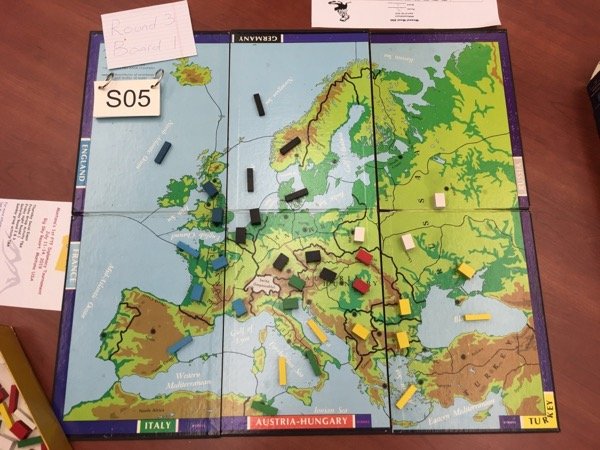 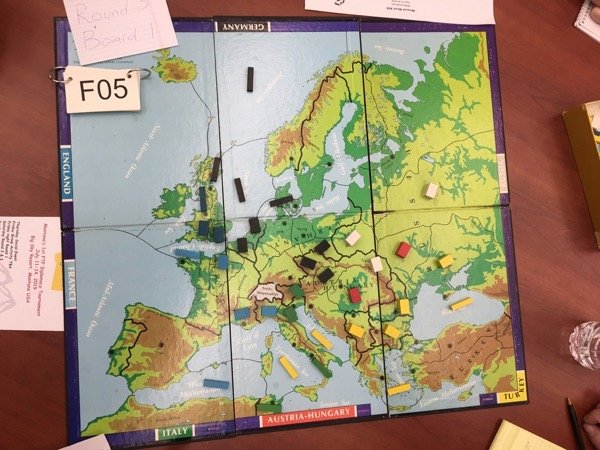 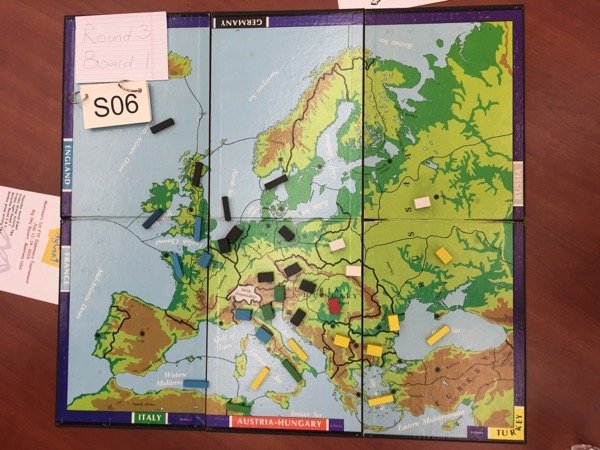 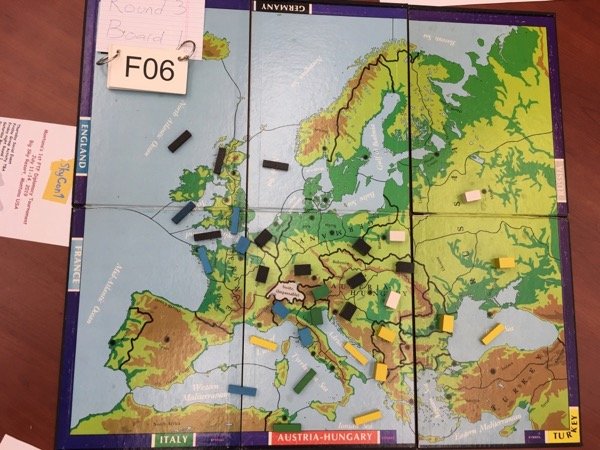 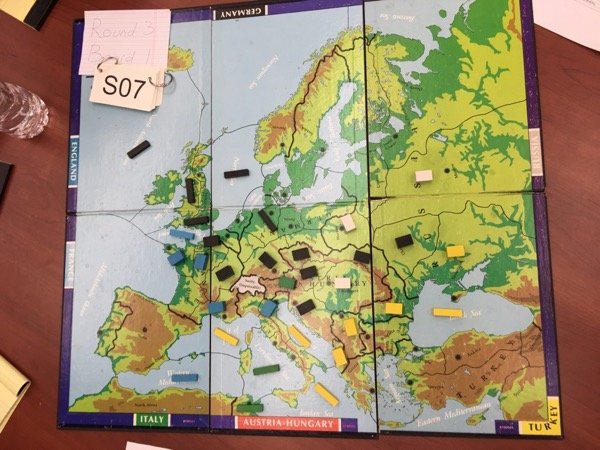 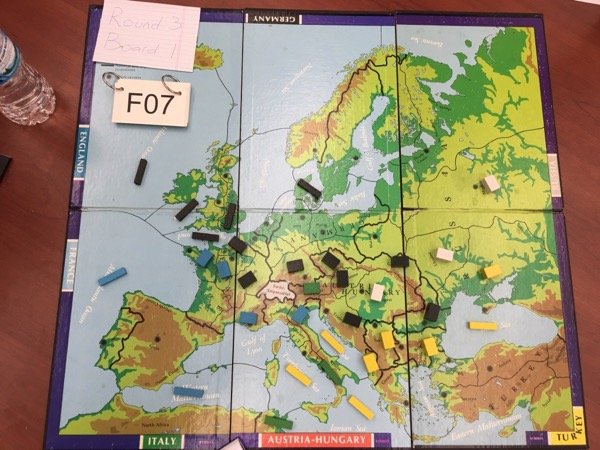 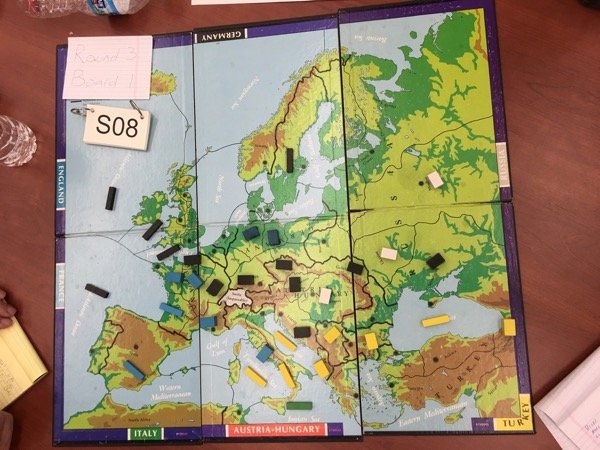 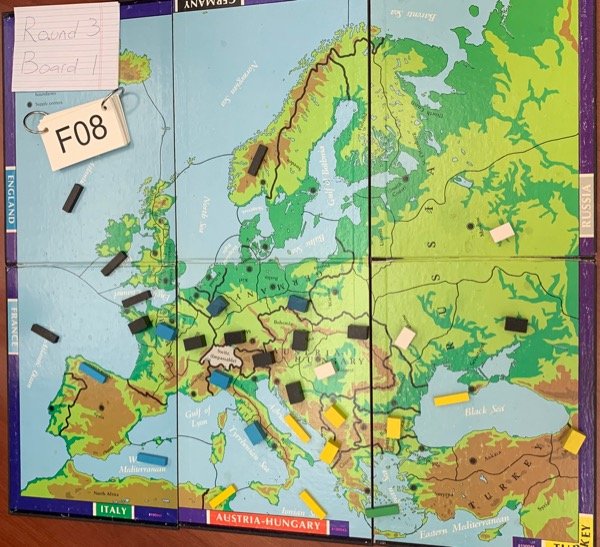 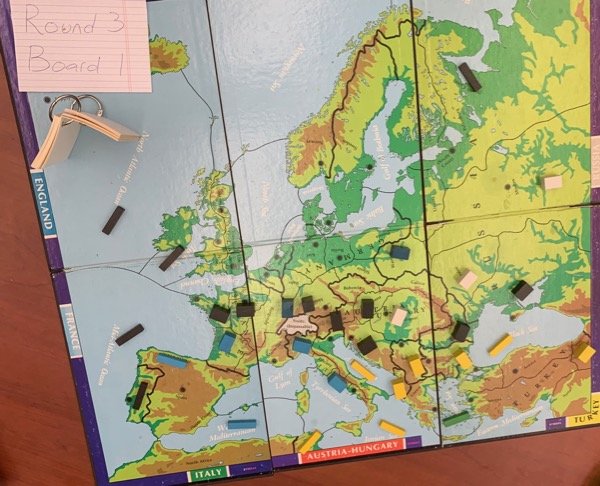 The Weekly Weasel — Week of May 30

Here’s the latest news from the Weasels. Three Weeks to First Stab! WDC will be here in three weeks, and as we long suspected, it’s

We have an election to conduct next week at the Weasel Pyle. Three two-year terms on the Sneak, our governing body, will expire after the

A board too far

Once before in our club history–at the first CODCon back in 2007–we asked three people to play on two boards to make numbers work. Since