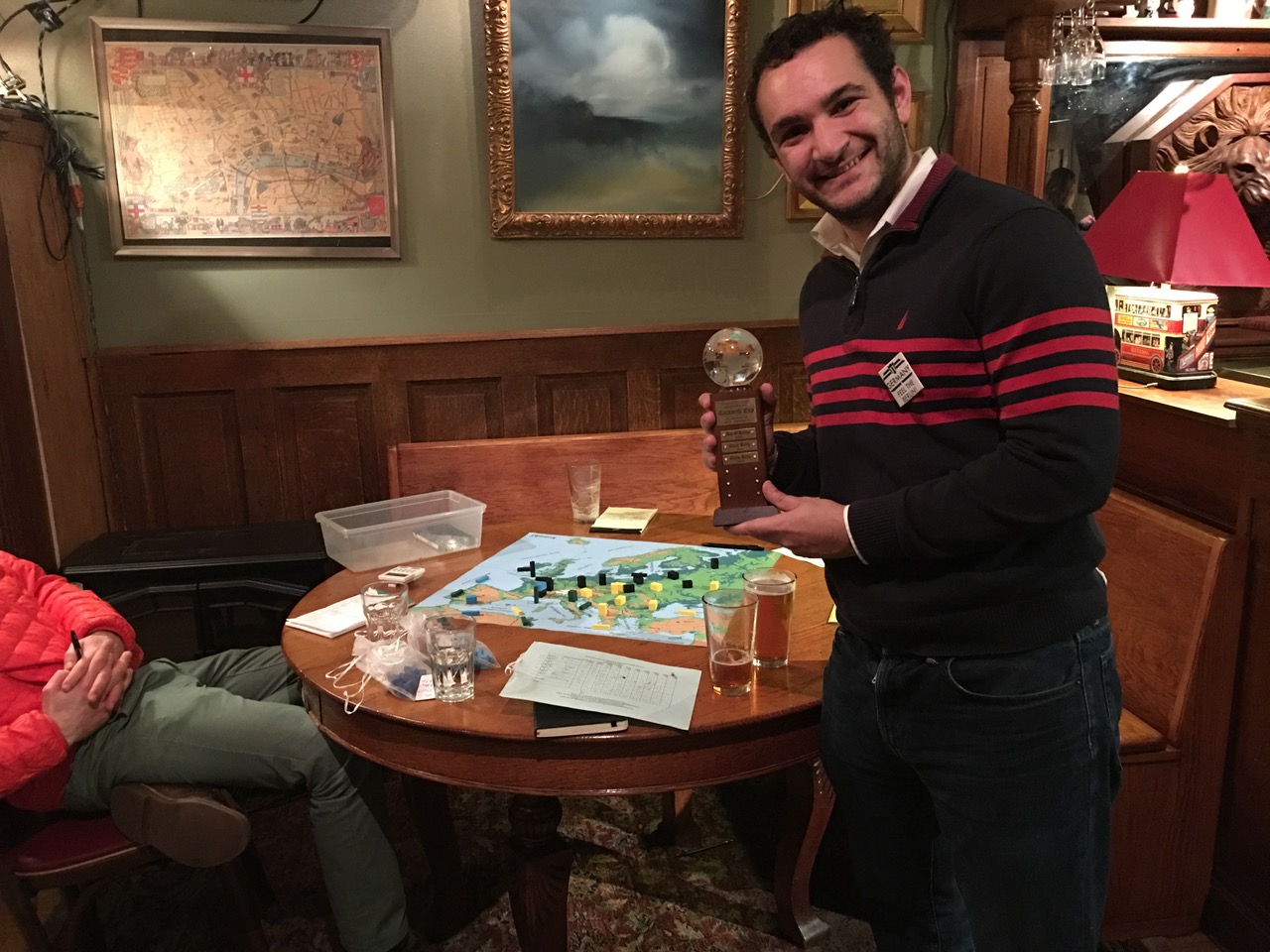 If you don’t like beer, heavy food and cheerless efficiency, then life in the new world order may be hard on you.
Jake Trotta guided Germany to a dominant win in last night’s Bar Room Brawl Championship Game at the Red Lion in Lincoln Square. He topped the board with 17 centers to earn a permanent spot on Cockerill’s Orb, the new Brawl trophy. Named in memory of Nate Cockerill, the Cockerill Cup will reside in the Red Lion, Nate’s home away from home when he lived here.
Jake grabbed the lead with seven centers in 1902 and extended it from there. He was playing short with nine centers after 1903 and ended 1904 with 10 centers and a four-dot lead on his two closest competitors. The game ended by time limit after the Fall 1908 turn in the following center counts:
Austria (Matt Sundstrom, 6th seed): 0
England (Brian Shelden, 3rd seed): 0
France (Brandon Fogel, 1st seed): 1
Germany (Jake Trotta, 2nd seed): 17
Italy (David Spanos, 5th seed): 5
Russia (Ali Adib, 7th seed): 0
Turkey (Jim O’Kelley, 4th seed): 11

The supply center chart is here. Endgame statements are coming…

(Note that Ali Adib was filling in for Christian Kline, who finished second in the Brawl Series but was a late scratch for the championship due to a scheduling conflict. Adib was the second alternate. First alternate Geoff Serednesky was unable to play. Also note that we were on the clock by 6:20. That’s almost as impressive as Jake’s win.)

The NADF Presents the 2010 Grand Prix!

The North American Diplomacy Federation is proud to present the 2010 Grand Prix!   This year’s race will feature 12 eligible tournaments. To qualify, each

The Bell Tolls for Chris

Old Clockwork Chris Kelly tolled 11 times at the Red Lion in Lincoln Square on Wednesday night, both turning in another board-topping performance as England