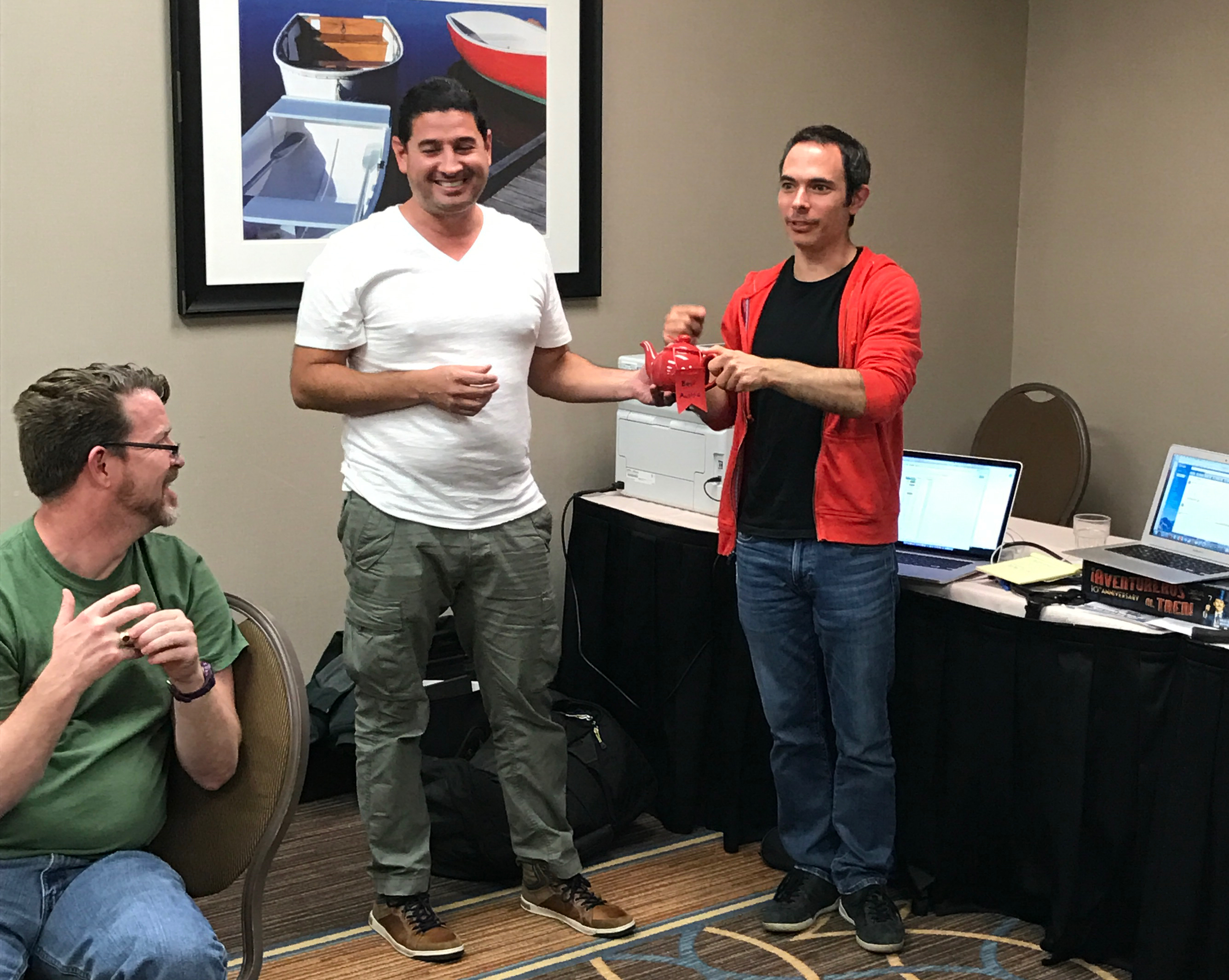 For a couple of days, this game appeared to be memorable less for what happened during it than afterward, as the events of the final turn provided the Tournament Director (Peter Yeargin) the chance to play a deliciously mean trick on me during the awards ceremony. When the tournament scores were released a couple days later, however, I discovered that I had actually played the trick on myself. I suspect that in most Diplomacy contexts karma is a difficult concept to apply. Not in this case.

First, the post-game context. We knew the game was timed but didn’t know exactly when it would end, and we were told going into F11 negotiations that there would be no 1912. So the stage was set for final dot grabs. I was playing Austria and could finish anywhere from 8 to 12, with a shared board top a remote possibility. In the end I expected 11 and a decent second place. When the orders were read, I was at 10, with one caveat: the Italian F ION had a retreat into a vacant Greece, which I owned. Italy, my game-long ally, was played by Jeff Ladd, who had already clinched the tournament championship. Knowing that my main goal by the end of the game was merely to finish in 2nd place ahead of Germany, then at 8, Jeff defended hobby honor and took the dot. A fellow Weasel pointed out to me that I might be in the running for Best Austria, and I joked with Jeff that he might have just cost me the award. I assumed that someone had topped as Austria previously and that I wasn’t really close, and I didn’t give it any more thought.

Until the awards ceremony. Peter pulled out the Best Austria award, an adorable red teapot, and began telling the story of the final turn. “After 1-dotting Brandon with a retreat, Jeff came to me and asked if he had just screwed him out of Best Austria,” Peter began. I sat up in my chair. Was I really going to salvage a weekend of mediocre results with a Best Austria?? A second-place Best Austria?

“I ran the numbers and found that, by 0.3 points, he didn’t take the award away from Brandon,” Peter said.

“No way!” I yelled, incredulous. I jumped out of my chair, ran over to Peter, shook his hand and grabbed the teapot, all in one motion so swift and enthusiastic that I almost fell over onto the scorer’s table. Regaining my balance, I threw a fist in the air and yelled “YEAH!!” loudly enough to make everyone in the room a little uncomfortable.

As I settled down, Peter continued. “Because he never had it in the first place.”

The room erupted. I feigned anger and stormed away. It was a great chaser to a fun weekend that was as much about getting to know the people in the hobby as playing the game. It’s good to make an ass of oneself once in a while, and I should do it more often. Doing it in my first travel tournament sets a good precedent. I found Jeff and thanked him for making the joke possible. After the ceremony, I found Peter, shook his hand, looked him straight in the eye, and said as menacingly as I could, “Look out.”

The story could have ended there and it would have been a good one. But then the tournament scores were released a couple days later and I saw what the Best Austria score actually was. I did some quick calculations and couldn’t believe what I found — I should have won Best Austria after all.

Why didn’t I? It wasn’t because someone dotted me, but rather because someone cheated. Someone did something in violation of the rules and, perhaps, the spirit of the game. Which someone would do such a thing?

That someone was me.

My early game was straightforward. Jeff in Italy had the tournament nearly sewn up, needing only to give up fewer than 30 points to Andy Bartalone, the only other player with a chance to catch him. Andy was playing Turkey on another board, and when he got off to a rough start, I knew Jeff wouldn’t need to turn on me to win the tournament. That didn’t mean he wouldn’t do it, just that he was less likely to. Russia (Tim Richardson) opened north, which slowed the tempo of our assault on Turkey (Matt Johnson) but gave me the opportunity to win most of the spoils. By the end of 03 I was at 8. Unfortunately, England (Chris Barfield) collapsed alarmingly quickly, allowing France (our very own Brian Shelden) to send fleets into the Med very early as well as Germany (Dan Pollack) to send armies south and east.

Despite all of my entreaties and threats to throw a solo to France, Germany refused time and again to turn on his French ally. After a tight back-and-forth naval battle with France, Italy and I were finally able to secure the eastern half of the Mediterranean (Italy’s 3 dots were Sev, Ank, and Smy), and France finally turned on Germany in order to snag a big board top. He had waited a year or two too long, however, and his units were not in great position. When Peter made the announcement that F11 would be our last turn, France had only taken Munich (with my help) and gotten in position to take Holland, and that could only be secured by risking Munich in order to cut a support.

The center counts were France 12, Germany 9, Austria 8, Italy 3, Russia 2. Ever since Germany had come after me in the mid-game, I had decided my draw condition was that I finish ahead of him. I was confident I would do it. Italy and Russia both offered me a dot, and I was poised to retake Venice from France. That would put me at 11, and Germany was likely to go down 1 or 2, thanks to Russia retaking St. Pete. And then I saw it: if I could convince Germany to support *me* into Munich, perhaps as revenge against his former ally, then I would actually get a shared board top at 12 (assuming France took Holland). I pulled Germany aside, made my pitch, and gauged the result. He was noncommittal. I decided to check in about it later in the negotiation period.

Like me, Brian Shelden (France) is a new Weasel. We’ve gone head-to-head more than a few times over the last year, and I’ve probably won more than I’ve lost. In this case, I thought he played the better game and deserved the board top. I had been saying for several turns that I wanted to see him get a big score, and I had (mostly) meant it. As I waited to see if Germany would go for my plan, I wondered to myself whether I would go through with it or not, even if he agreed. It would be a pretty gnarly steal, the kind of thing both sides remember for a while, with grudging respect and a little bitterness. Maybe it would be enough for me to get Germany to write the order and then *choose* not to take it. That way I could prove my mettle and still do the “right” thing. Even better than winning, right? Didn’t matter; I never got the chance. It became clear with about a minute left that Germany wasn’t going for it, and I resolved that Brian should get the biggest board top possible.

I went up to Brian and told him to take Holland. I would support Bur-Mun and hit German units in Sil and Boh, guaranteeing at least a bounce in Mun (the German had a third army in Ber). “Trust me,” I said, convincingly. He went for it, changing his orders and scribbling furiously as time ran out.

It was my turn to read orders. I read mine out first; I came through with Tyr S Bur-Mun. An audible sigh of relief from Brian. Then I read his orders. He had 12 units, so it took a while. Nothing was surprising until the last order, for his army in Munich. In order for the attack on Holland to succeed, Munich had to cut support from the unit in Kiel.

Brian had written “Munich to Berlin”.

I hesitated. I knew that he knew what the correct order should have been. But these kinds of misorders happen all the time, especially with a tight clock, and it’s just part of the game. Would he still top the board? That would depend on Germany. If Germany took Mun instead of War, then Brian and I would share the board top at 11. That is, unless I said the words “Munich to Kiel”. In that case Brian would be guaranteed the board top and would get a sizable one if the rest of the orders broke his way. I knew the stakes for this game were low; none of us (apart from Jeff) were in contention for even a top 7 finish. Best France belonged to Jeff Ladd’s solo from round 1.

I said, “Munich to Kiel,” quickly closed the book, and handed it to Brian.

Germany did follow through with the attack on Warsaw and Italy made a surprising and low-percentage swipe at Nap, rather than simply hold with support from his F EAS. For no particular reason, France supported himself into ION (correctly), which created the aforementioned retreat opportunity for Jeff.

Had I read Brian’s orders as they were written, I would have been sitting at 10 with Germany at 9 before retreats. Knowing and respecting that I wanted to finish ahead of Germany, Jeff would not have taken Greece. The final counts would have been 12-10-9-2-1, which would have netted me 30.303 points.

In other words, I cheated, for someone else’s benefit, and incidentally STABBED MYSELF. The Rusty Blade award, recognizing the worst stab of the weekend, was given to fellow Weasel Jake Trotta, who insisted that I deserved half of it.  How right he was.

As a postscript, I should add that I don’t condone what I did. It was unfair to Dan, giving him a lower score than he would otherwise have had, and I hope he won’t be angry if he ever finds out. I’m certain I wouldn’t have done it if he’d been gunning for a high finish or an award. I’d like to think that I wouldn’t do something similar in a higher stakes setting, but of course one never knows until the time comes. In any case, this time, I think I got exactly what I deserved.

A look at last year’s players

Everything went Matt Sundstrom’s way in Spring 1901, as evidenced by the look on his face. When the Germans opened to Holland instead of Denmark,

Our inaugural Bar Room Brawl championship will be decided on Sept. 4 at the Red Lion, beginning at 6 p.m. The championship game will end