Form alliances and unhatch traitorous plots as you negotiate and outwit—in a delicate balance of cooperation and competition—to gain dominance of Europe! In Diplomacy, your success hinges not on the luck of the dice, but your cunning and cleverness. Each player represents one of the seven “Great Powers of Europe” in the years prior to World War I.

The objective of Diplomacy is to be the first Great Power to control 18 supply centers.

The game board is divided into provinces. There are three types of provinces, inland, water, and coastal. Coastal provinces are land spaces that are adjacent to water. Provinces designated as supply centers are marked with a circle. 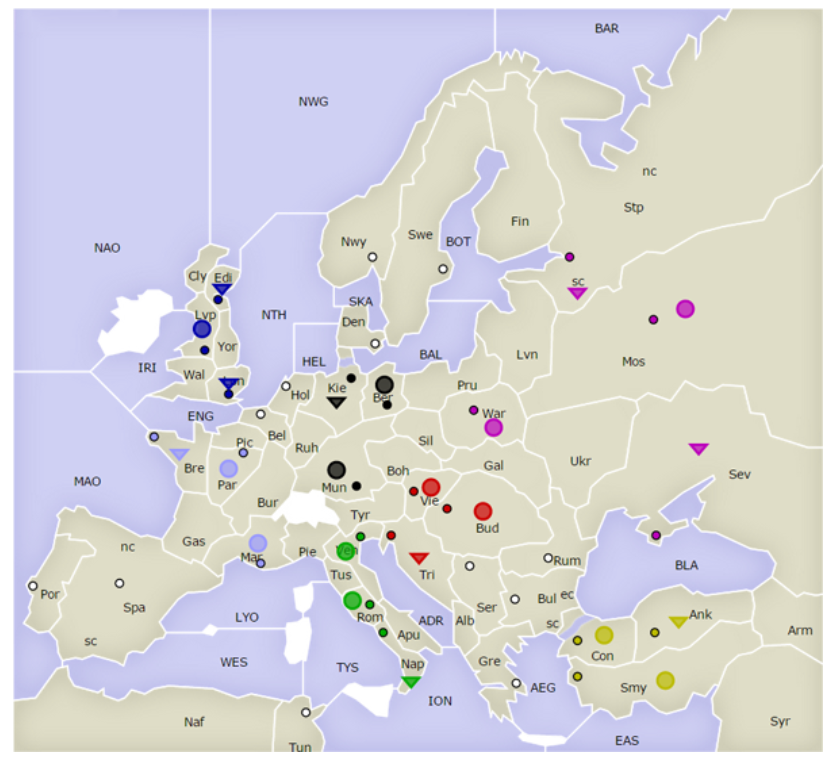 There are two kinds of units, Armies and Fleets. Each province can only hold one unit. All units have the strength of one.

This unit can only move on inland or coastal provinces.

This unit can only move in water and along coastal provinces. It can also convoy armies across sea territories using the convoy move.

Each turn represents six months of time. Beginning in 1901, the first turn is called a Spring turn and the next a Fall turn. After each Fall turn, Powers gain a new unit when they gain control of a new supply center and lose a unit whenever one of their supply centers is occupied by a different power.

Each turn has a set of phases:

Arguably the most important phase of each turn, during the Negotiation phase players make non-binding agreements with each other.

During the Order Writing phase of a turn, each unit may be given a single order. Units may hold, move, support, or convoy.

The unit will defend if its territory is attacked, but otherwise do nothing. Unordered units automatically hold.

The unit tries to move into or attack an adjacent province. If a unit is ordered to move into an occupied province, it is referred to as an attack.

The support order is the most critical order in Diplomacy. You can support another unit’s move or hold order. A support order adds a unit’s strength to another unit. As no one unit is stronger than another you need to combine the strength of multiple units to attack other territories.

If a unit is attacked, its support is cut because it must defend itself.

Fleets given the convoy order can move an army across water provinces. You can string multiple convoys together to move an army unit a large distance in a single turn.

After all orders have been turned in, orders are read out loud and adjudicated at the table.

During the adjustments phase, Powers determine control of supply centers and adjust their unit counts.

If a country has fewer supply centers than units, it must disband the excess number of units (owner’s choice of which units).

If any Power controls 18 supply centers, they automatically win the game. Players can agree to end the game before this happens through a voting process known as a Draw Vote. All votes are secret, and the results must be unanimous. Before a game begins, players can also agree to end the game some other way such as at a specific time or after a specific number of game turns.

Now that you have learned the basics, you’re ready to play the game.

All graphics from backstabbr. Document format from webDiplomacy.